As I type, episode one of Coordinated Universal Time is merrily propagating its little way through the RSS mycelium of the internet. We uploaded it to Anchor.fm a couple days ago.

On April 3rd, I shared an idea in the Locutory: 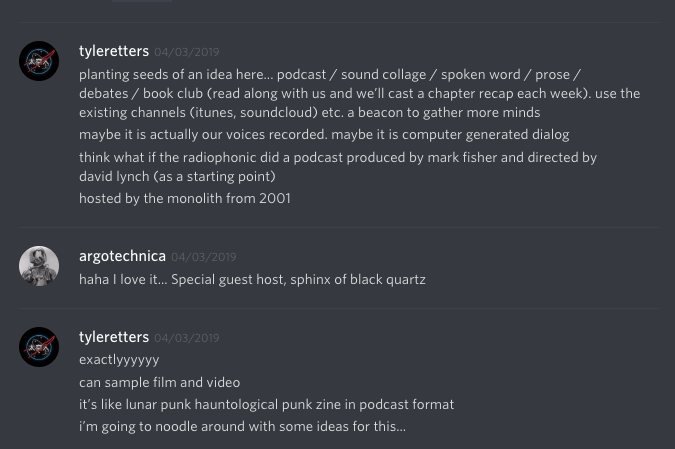 Four days later we had a 10 minute demo completed. There were only three segments. @argotechnica, @notinferno, and I each read some words into our field recorders. A fresh dub-techno track that @MatthewTheStoat and I worked on the previous day became the intro background music. I mixed it in under an hour.

Dropbox. We sent the demo to our trusted friends and confidants. Responses in the positive. Curiosity. Encouragement.

What they heck? Did we have a live one?

Mindflare, noun: that phenomenon of uncontrollable thought whirlwind. Spiraling microbursts of nervous system impulses, churning geodesic synapse fractal, unbounded creation. The only way out is through your medium.

We had more ideas than we knew what to do with. Clearly, we hit some collective, untapped, mineral-rich vein of creativity.

Some of our name concepts: Hidden Cities, Hauntology Podcast, Hauntologists Working Group, Haunted Dispatches from the Vaporwave Mall, Lunar Punk Something, Living Numbers, Asterism, Commoner Earth. Naming things is hard, but we had fun with it.

I used to think there was an answer to it all. All the reading, all the links, all the late nights diving Wikipedia. I thought it was all leading to a terminus, an end point, a single epiphany. I realized no such point exists. And I realize that is also exactly what this podcast is.

It should be noted that before we started on UTC, we had setup a GitHub repository and Discord server to work on some type of project together, but we weren’t sure what. So all of our thoughts and ideas were well captured and documented with version control.

One morning, I found myself at the Pacific Ocean before sunrise. Instead of enjoying the waves and strange, early morning humans that inhabit such shores I recorded a reading of Neuromancer and:

I’m thinking the pod structure ought to be as high level as possible. Basically: intro w/ patreon, announcements, etc., middle, and outro with credits.

Later that day, we had the breakthrough for the name: 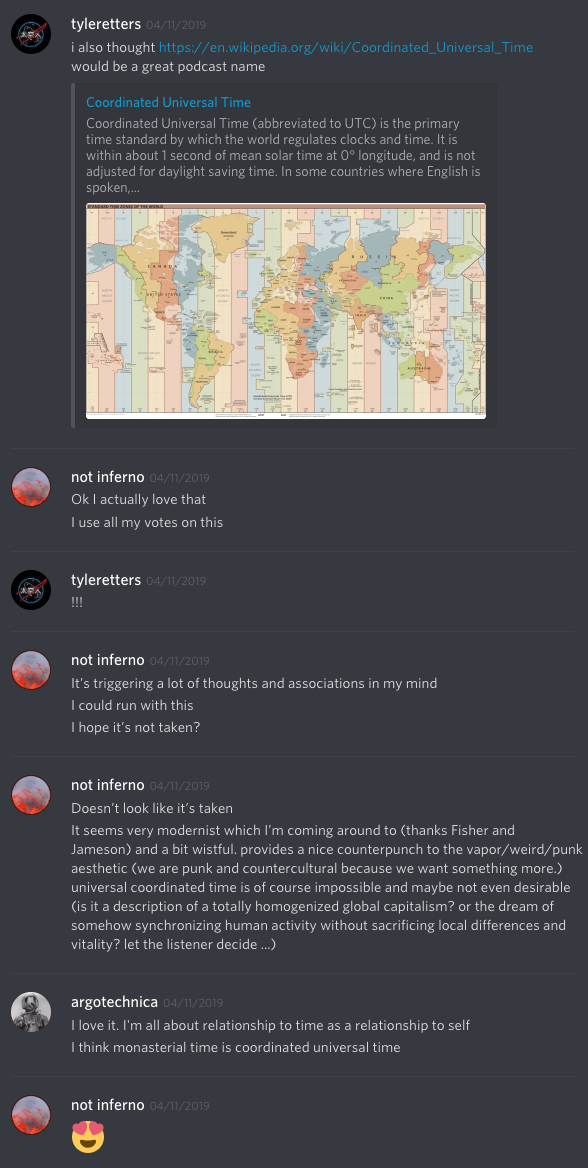 The acronym is beautiful. It represents a compromise between different groups of people to sacrifice their individual preferences in service to a greater standardized signifier:

There are a million more tiny stories like this. Each equally profound. Each equally banal. Infinitely interesting and unmistakably forgettable. 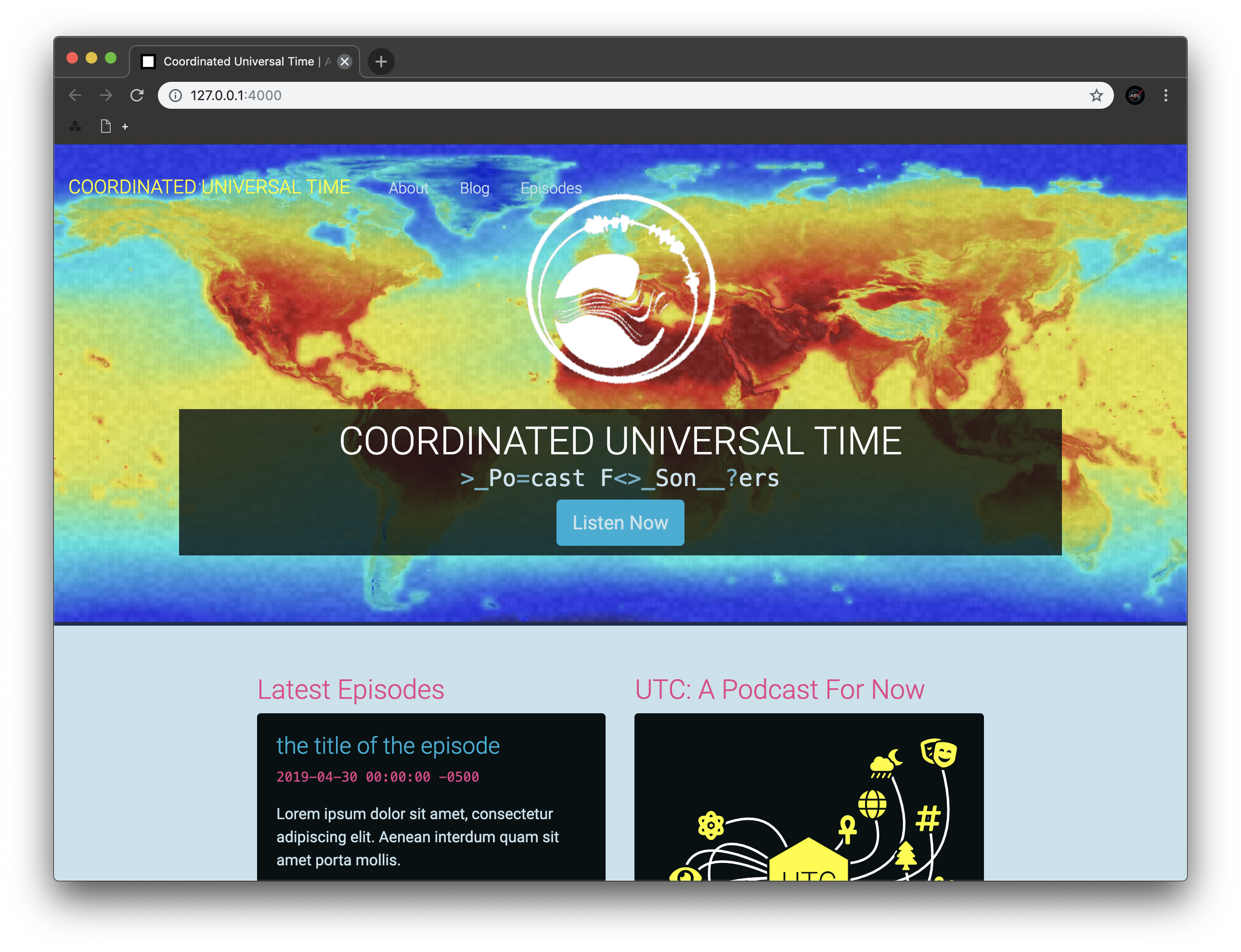 We made some lockups: 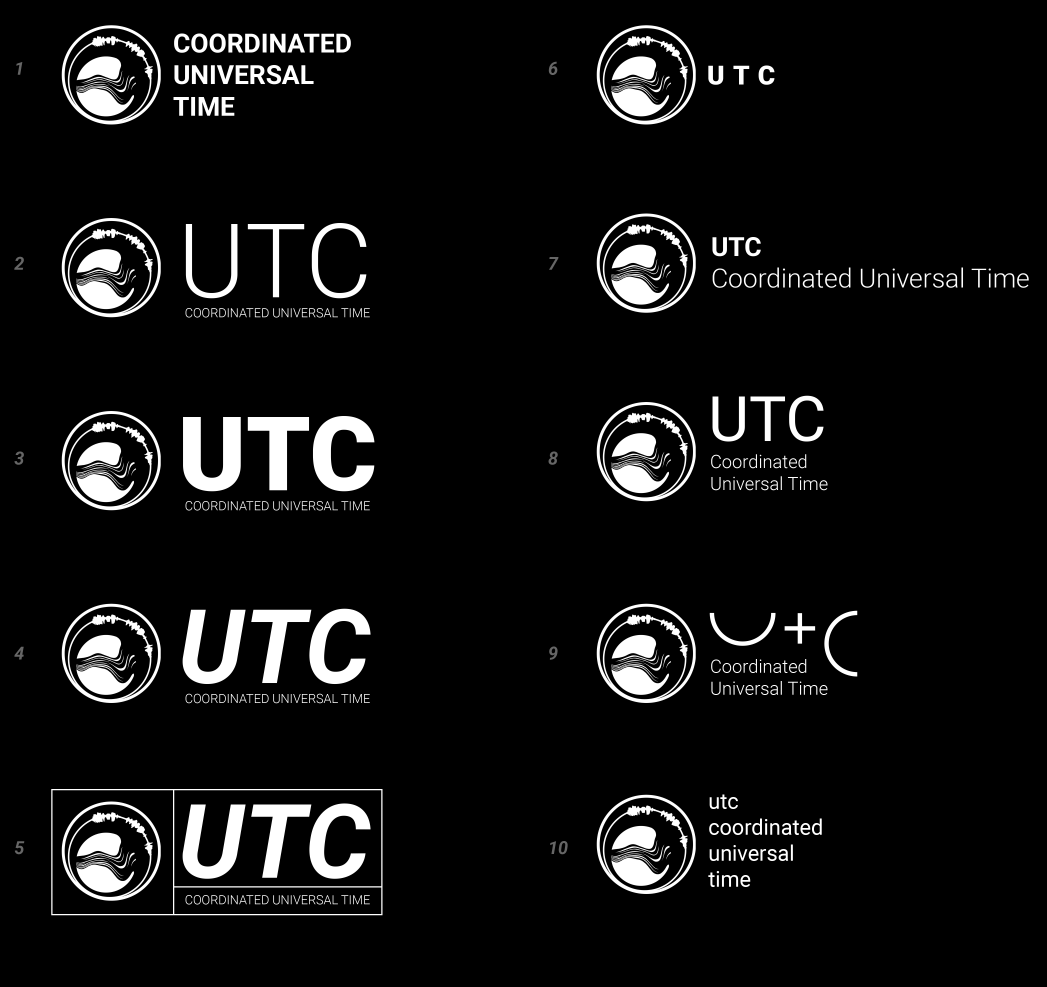 We interviewed some people.

We recorded some fields. And we fielded some recordings.

I wrote A Shard of the Origin Story and recorded it down by the Fox River.

All the while a constant drip of collective text and ideas bubbling in the Discord channels.

All the while, I navigated one of the most emotionally turbulent times of my life. Therapists, doctors, worries, anxieties. Somehow all unrelated to UTC but also impossibly intertwined.

We launched a Nextcloud server.

We documented some architecture:

We talked about how media and podcasts and society and capitalism and socialism and eco-futurism and hauntology.

We wrote an SEO optimized description:

Coordinated Universal Time is a sonic collage of foxfire-side readings, thinking machines, disembodied conversations, music we found in this world or made in another. Deep time reverberations and field recordings from the front lines of a future held in common. An aural zine hand-pasted and neural-networked by solar golems from the 23rd century, still quickening in the coals of the present: a podcast for now.

All the while negotiating words, smithing sentences, distributing cognition. There were/are no egos here. Or perhaps, they are very tiny and very well behaved. We collectively saw something collectively and went for it.

We made three (3) prototype versions of episode one.

We made four (4) “release candidates” of episode one.

We shared these with increasingly discerning circles of ears and minds. The feedback, ever-arcing up and to the right. There were some bumps (@utcpodcast was claimed, coordinateduniversaltime.com sells sex toys, etc.) but no soul crushing nights of despair that I’m use to being a part of the creative process. There were video calls and Signal messages. SMS’s and emails. A few tormented decisions about content and authorship. Copyrights. Distribution. LUFS. Optimal “commute time” lengths for a podcast. A highly unexpected opinionated conversation around calling “Siri” by name. 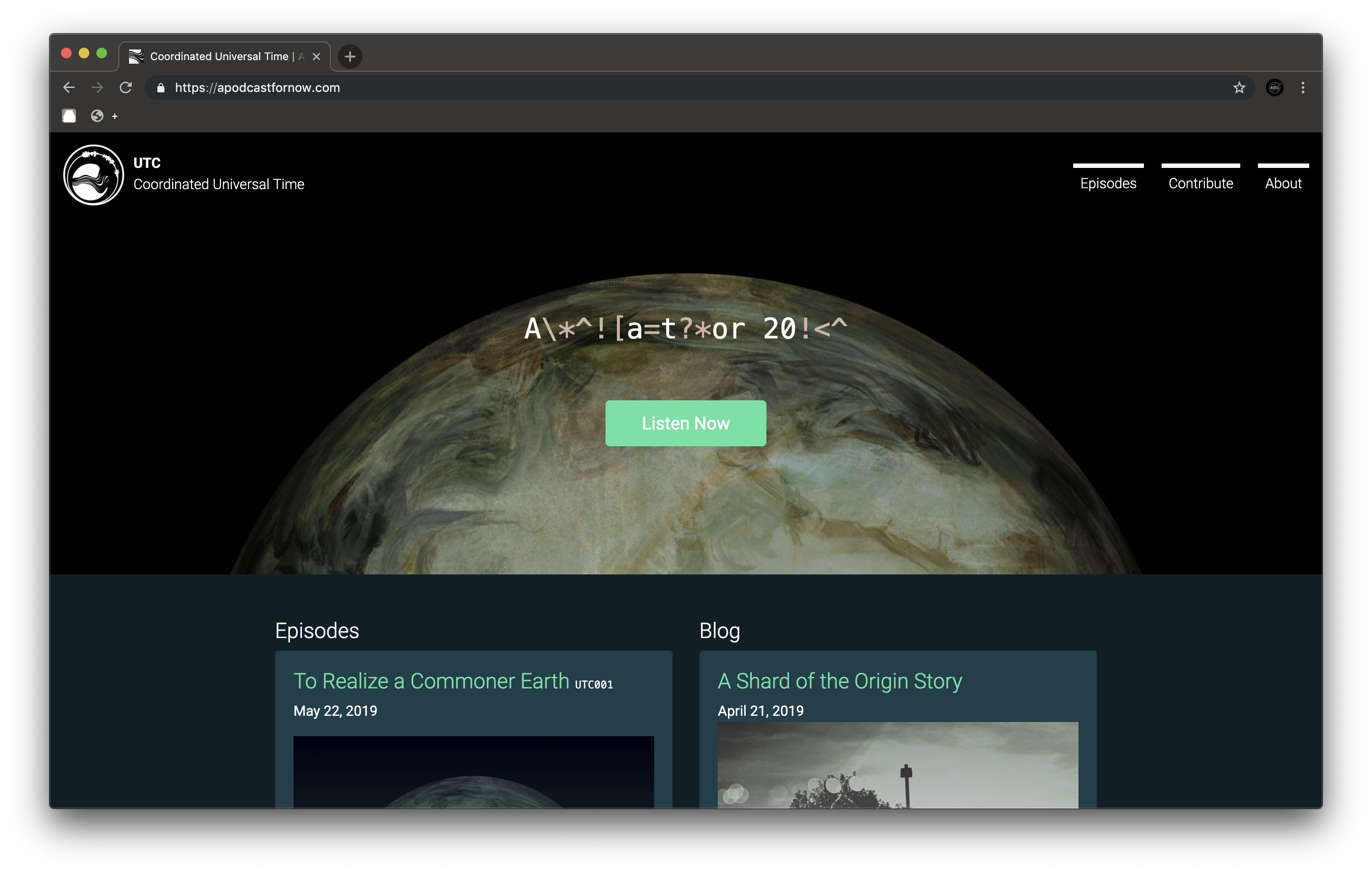 We strove for consensus. That gets you the best results, but it is also the most work. I think we did a damn good job.

None of us live within 400 miles of each other, you know. At this point we were spread across 4 timezones. Progress seemed to be happening at all hours of the day.

We dreamed about it.

Then we released it.

Seven short weeks was all it took. It was possible. You can do it, too.

A Podcast for Now

I like this story. It is the story of communal labor and ideals. The story of a bunch of people coming together with a mutually compatible vision and creating something awesome. Maybe learning a thing or two about themselves, each other, and the world along the way.We made it for us. We made it for you. But I don’t care if no one listens.

I hold UTC lightly. It is not mine. It is ours. UTC brings me joy. And part of that joy is the labor, the pain, the agony of micro-deicisions around adding .1 dB to voice or subtracting .05 dB from music. That is the work. So are the conversations about it all. So are the blog posts like these and those yet unwritten.

Coordinated Universal Time is not an endpoint or the apotheosis of my practice. But it sure is the most fun I’ve had making stuff in a really long time.

I won’t get too much into the meaning of vision of UTC here, because in many ways that is not my story to tell. It is all of ours to discover.