When I was a boy, I watched a lot of Toonami.

Toonami was a programming block on Cartoon Network that specialzed in Japense imports. It was some of my first exposure to anime, and by extension Japanese culture. I spent many years thinking I was literally the only person in the USA who knew about anime.

“A boy has the right to dream. There are endless possibilities stretched out before him.”

This video is a montage of shots from several of my favorite series, but most prominently Outlaw Star. Downtempo dubby music, which I believe was composed Joe Boyd Vigil, plays under a smattering of monologues and inspirational dialog.

“Whatever happens from now on, you stand firm and face your desinty without fear, but with courage.”

At the end of it all, we zoom out to see Tom, the show’s host, quietly reflecting on the video. His hands are behind his back. He appears to look at the camera, as if he knows the gravity of what was just broadcast. We pull back into space and the song wraps.

“Believe in yourself. Create your own destiny. Don’t fear fate.”

This video has consistently been something of a psalm for me. A sacred hymn for the dark nights of the soul. I cannot overstate the effect this had on me as an adolescent 12 year old, alone and huddled around my 13” tube TV watching the Midnight Run with the lights off.

Just read the YouTube comments. I wasn’t alone. Hundreds of other 12 year olds were having the same experience: 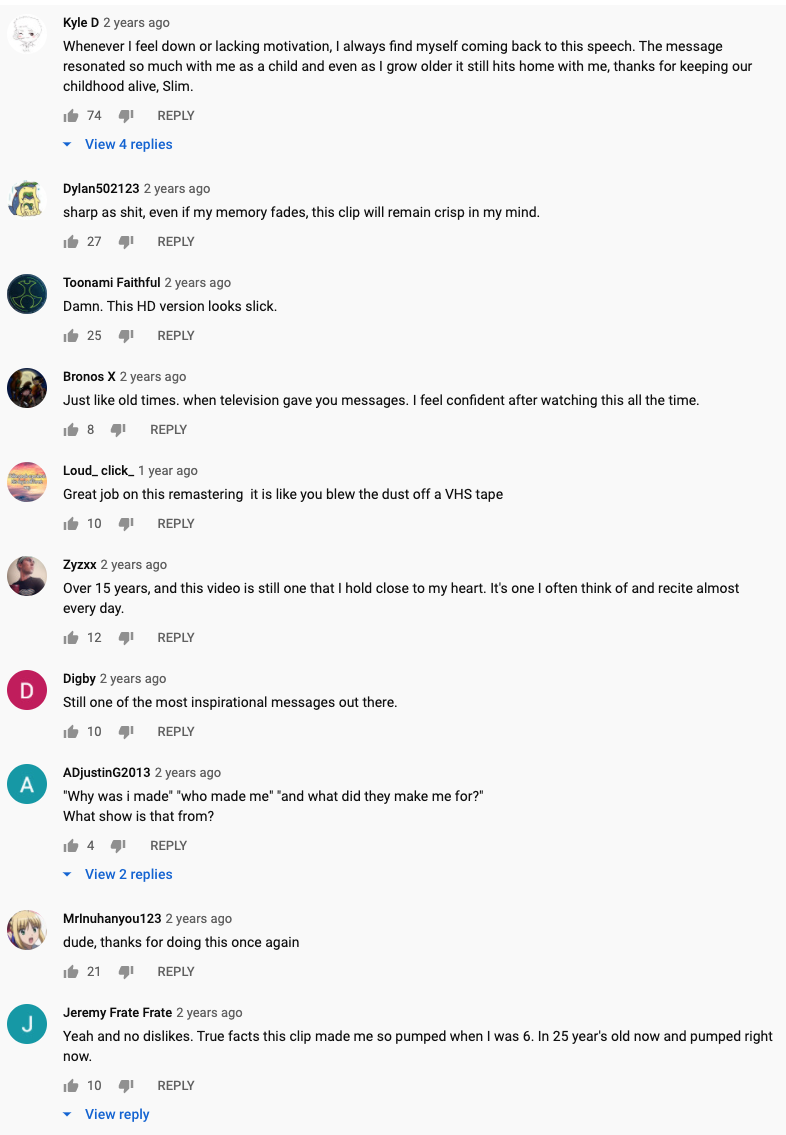 I unabashadely embrace the earnestness of this video, the music, the message. In an age where irony, sarcasm, and apathy are the defaults, this is a healing salve.

This reminds me of why I got into explicilty sharing my music and art in the first place. I wanted to make people feel the way this video made me feel. I wanted to pass that flame on.