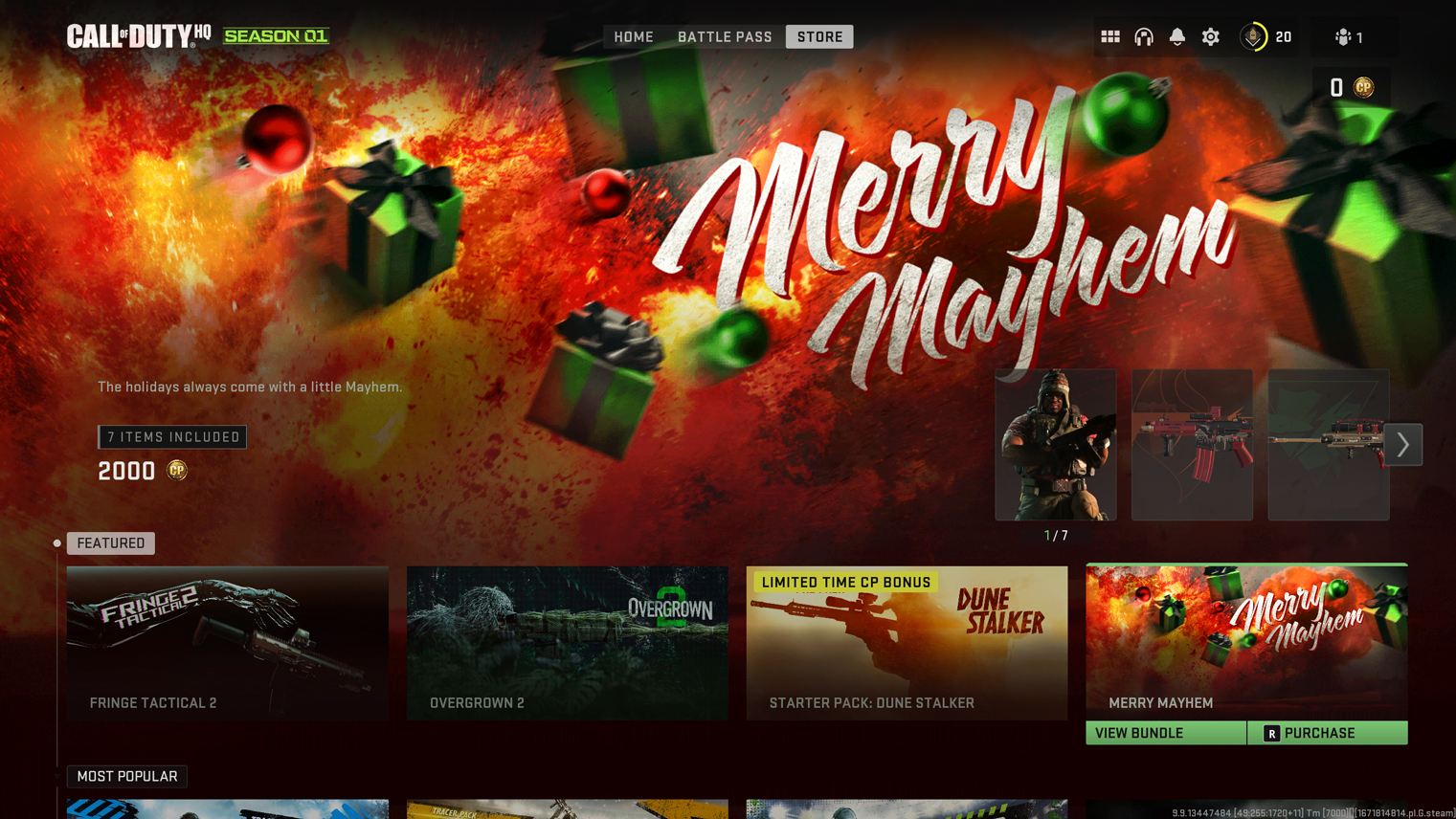 Free-to-play (F2P) and Pay-to-win (P2W) games are a relatively recent innovation in the interactive media space. F2P games allow players to download and play without spending money. But, each time you login, you will be confronted with increasingly elaborate, confounding, and garish online shoppes, hawking virtual wares for your virtual avatar. These items are generally cosmetic or non-functional - they don’t give you an edge in gameplay, but they certainly give you a dopamine hit.

Like F2P games, P2W games are typically “free” but also contain micro-transactions which yield higher-quality items and abilities. These are always somehow better than their free analogs: guns that shoot further, armor with more hit points, special shoes that make you run faster. You get the idea.

The development of Coral Carrier Incarnadine has lead me down numerous paths of research, and micro-transactions are no exception. In the name of science, I’ve opened up the Northern Information coffers and gone on a little spending spree. What follows are my discoveries from Call of Duty® Modern Warfare® II Warzone™ 2.0, Fortnite, and Magic the Gathering Arena.

This is a photojournalism assignment of the dread capital-extraction zones of video games. These “vaporware malls” are corporate virtual-freeholds and panopticons of self-isolation. Our every disembodied-action is surveilled by the builders, but paradoxically, we can’t see each other even though we’re all passing through the same antechambers to get to the actual game.

User experience anti-patterns run rampant. Some are intentional and calculated. Others are undoubtedly emergent, the net result of high-velocity iterations and fast-virtual-fashion supply chains. I’ll spare you a critique of layouts, user flows, and UI elements because it is all objectively, undeniably, scientifically, provably bad.

First up: a calculated detour to the Epic Games store. 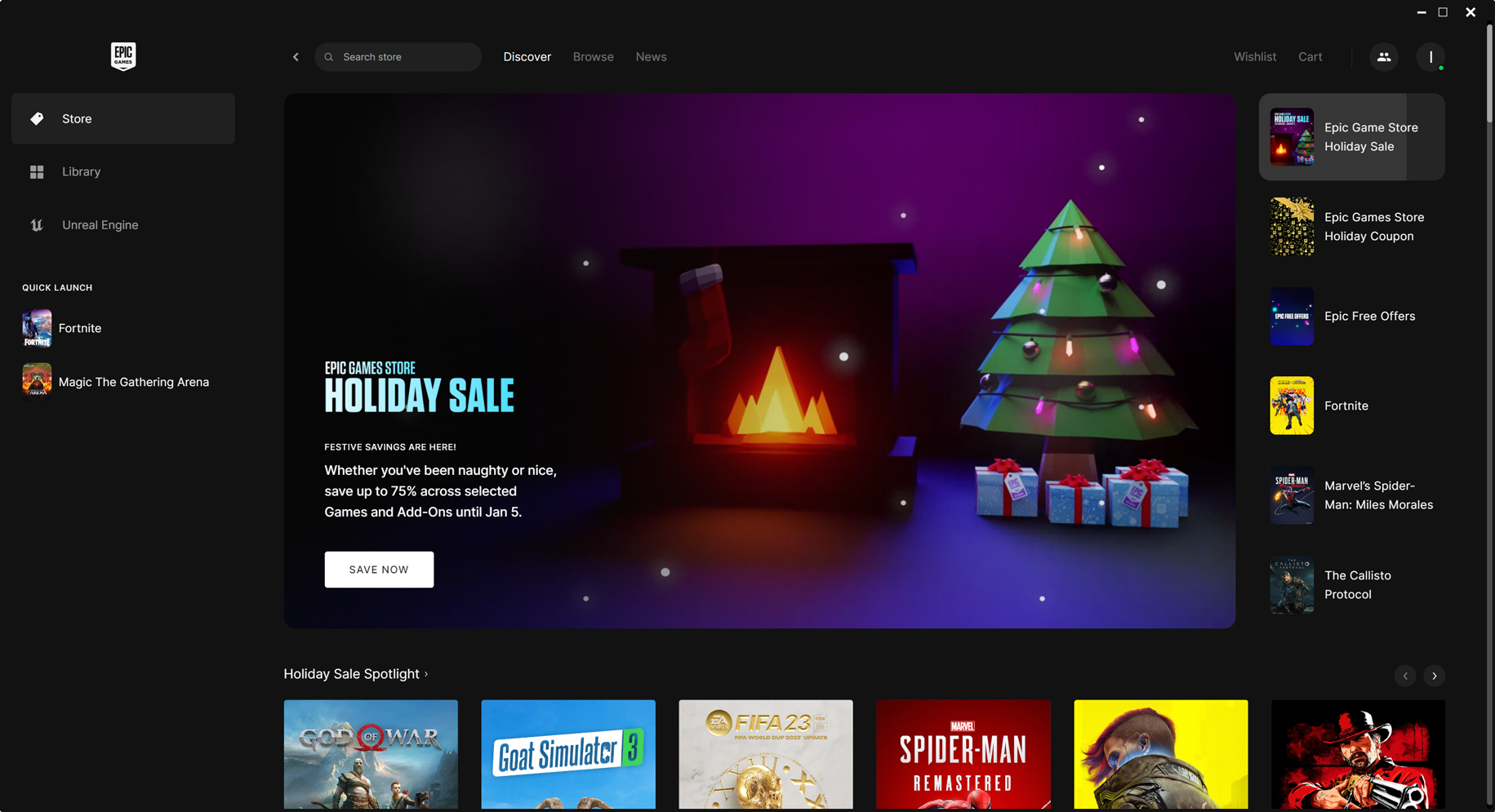 The only way to launch Fortnite or Arena is via the Epic Games launcher. We’re not even in the game and we’re already being solicited. The main call to action reminds us to “Save Now.”

I click on Magic: the Gathering Arena and eagerly wonder what holiday offers await.

Magic: the Gathering made history in 1993 by becoming the first P2W game of the modern era. For a nominal cost, you can buy some cards (either pre-constructed or fully randomized) with which to build your deck. If you and all your friends are playing this way, things might stay even for a while. But then someone will get the idea that, “Hey, I always win with this card… What if I just bought some more of this specific card?” Thirty years later and the Magic secondary market is as strong as ever. Ebay recently acquired TCG Player, solidifying their monopoly. There are individual Magic cards that sell for over $10,000 USD.

Part of the cost is due to the power-level and, therefore, demand. Another component is artificial-scarcity and an eldritch construct known as the Reserved List.

How do these mechanics translate to virtual cards? Quite well. You can win (or buy) booster packs which have some random cards and wildcards. Wildcards come in four flavors (common, uncommon, rare, mythic) which map to the card rarities. A wildcard can be redeemed for any card of that rarity. If you want to play a competitive deck, you’ll need a lot of mythic and rare wildcards…

The landing page is loud, confusing, and always changing. It is a grotesque chimera of micro-transactions, daily quests, and content. I see I have a balance of 21,700 gold and 4,080 gems. I briefly forget which is purchased with fiat and which is harvested from winning, even though I’ve been playing Arena for years. 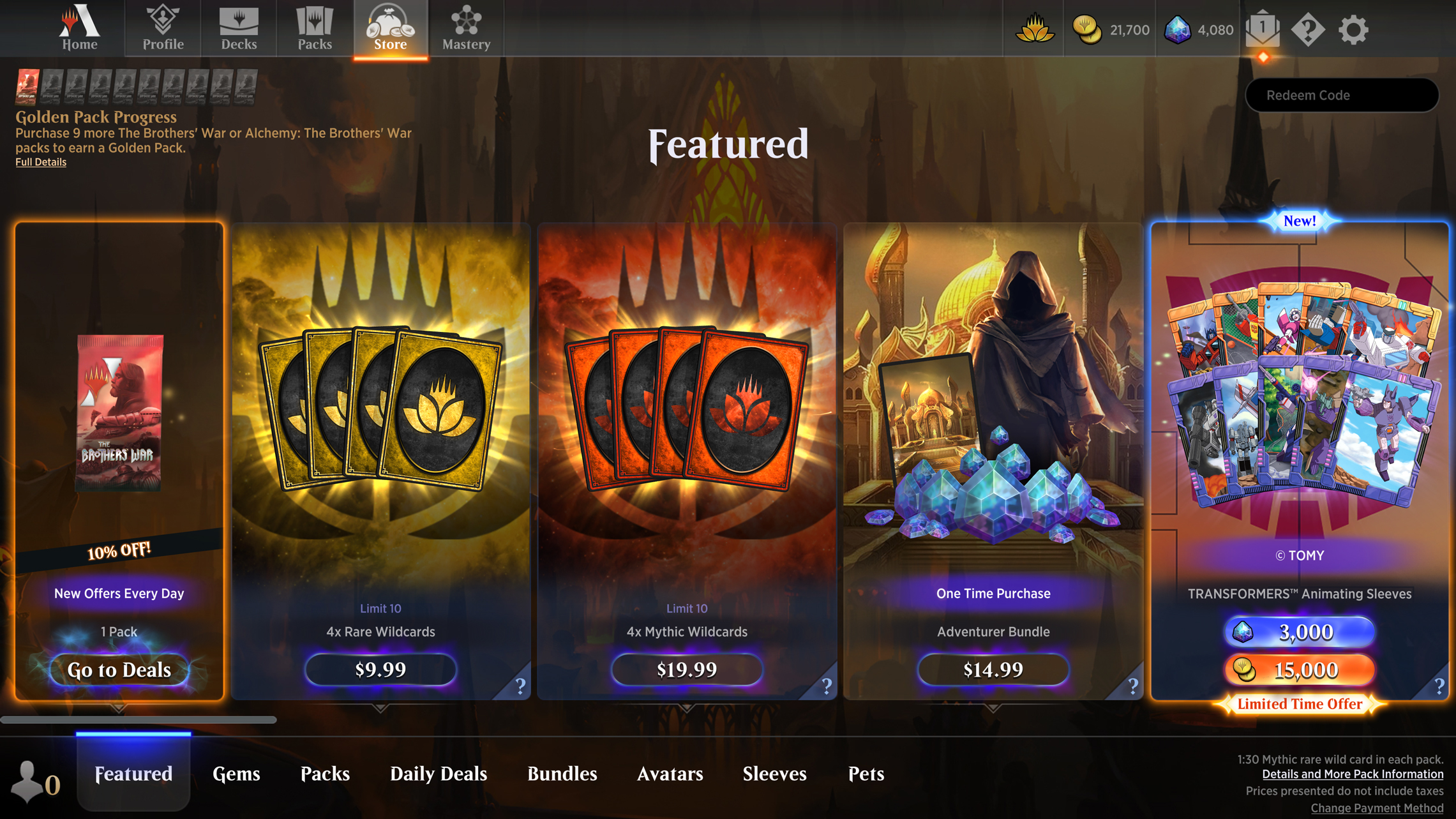 The Store tab is glowing, so I click it. Deals. Limited time offers. One time purchases. What is going on? What do I want to buy? Do I even want to buy anything? Maybe it will make me happy? What does my primal id call for? Glowing things. Always glowing things! TRANSFORMERS™ Animating Sleeves are glowing the most. I click on it. 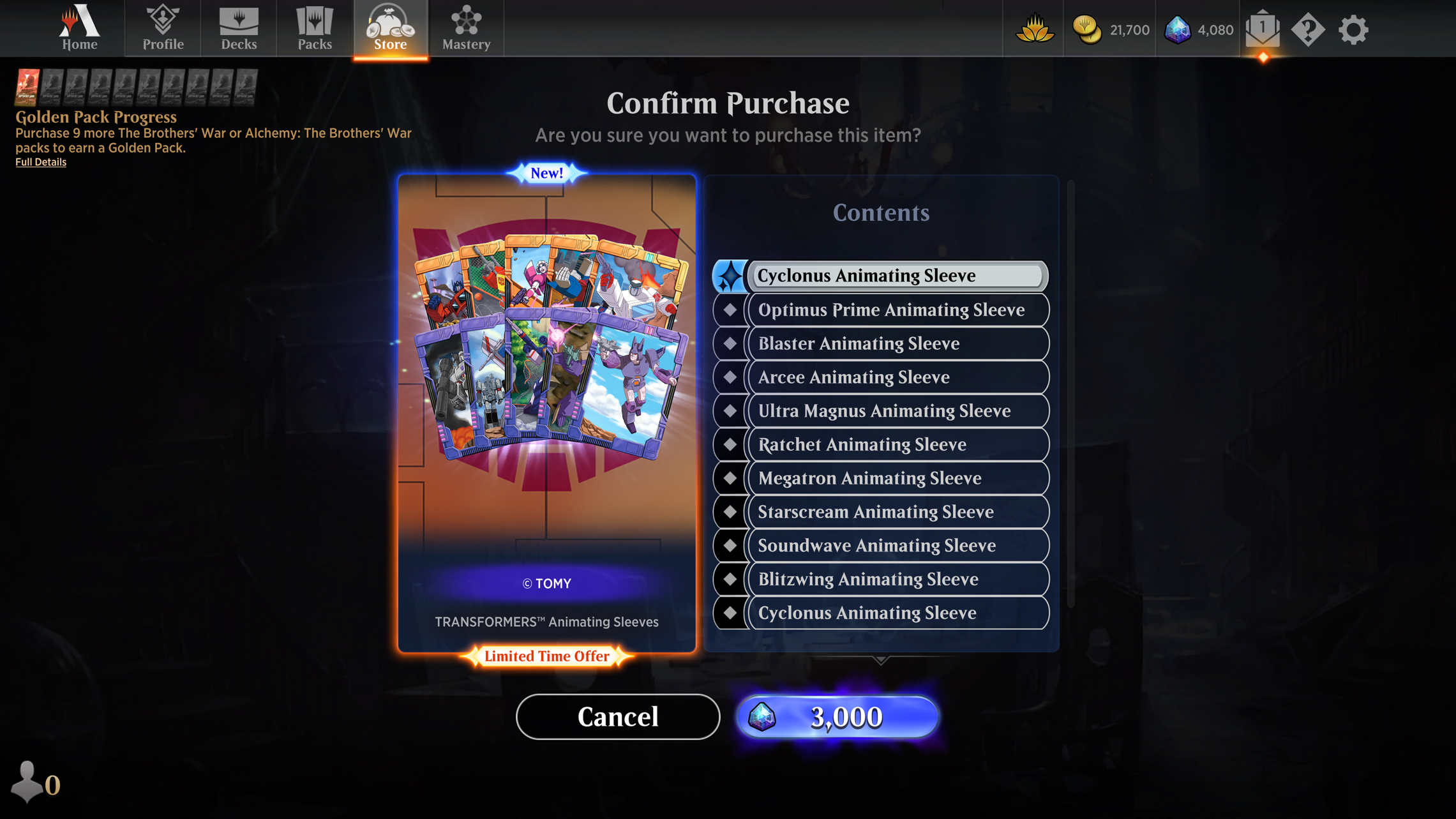 On second thought, how much is 3,000 gems, again? I’m not really into TRANSFOMERS™, though I did enjoy Beast Wars… 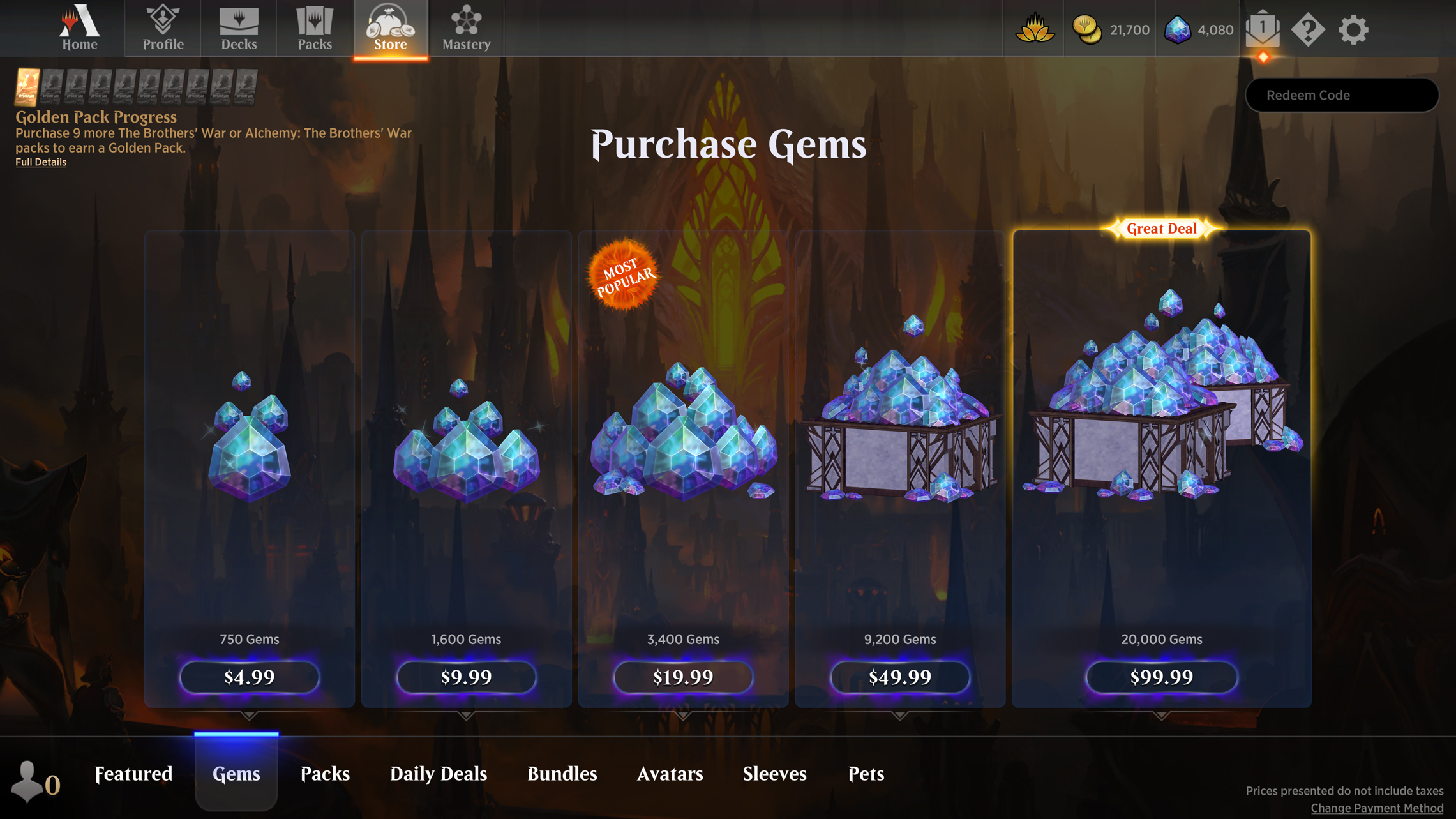 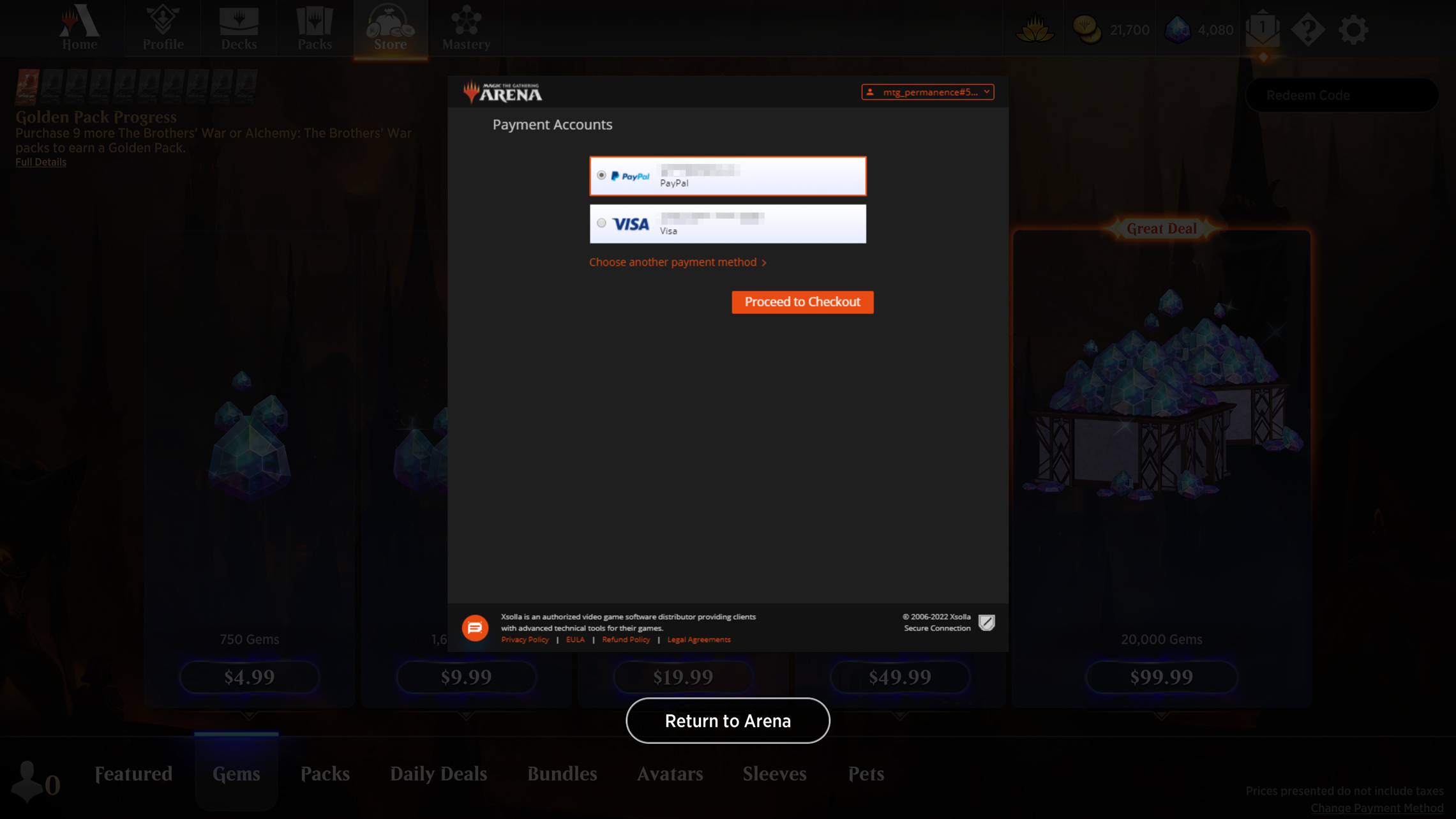 The illusion of glee is quickly shattered by an iframe implementation of a payment screen. (This is a notable improvement from previous iterations of the software which launched a browser and broke immersion. The “Return to Arena” button lingers, alluding to that darker history. “Are not we still in Arena?”) 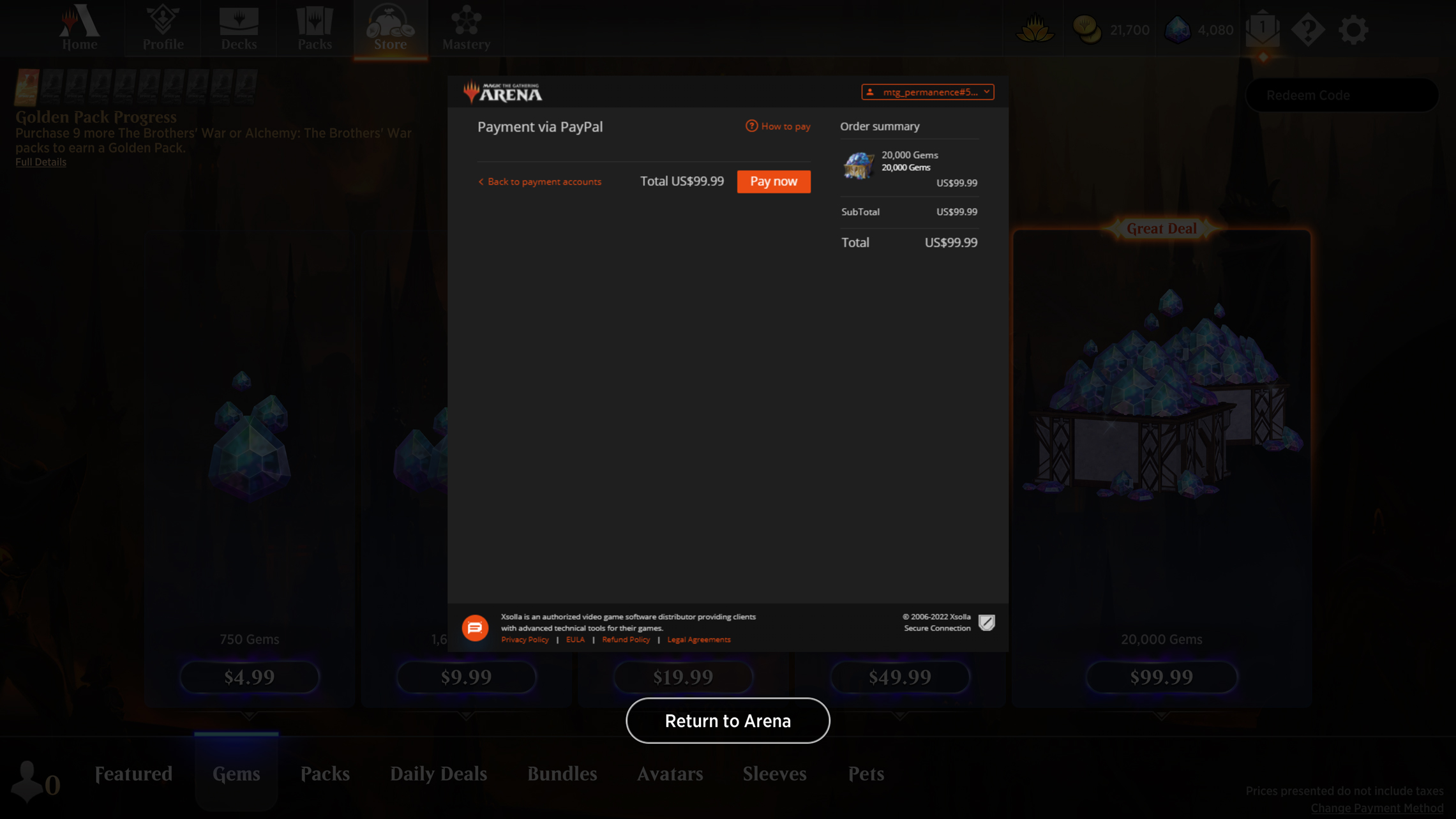 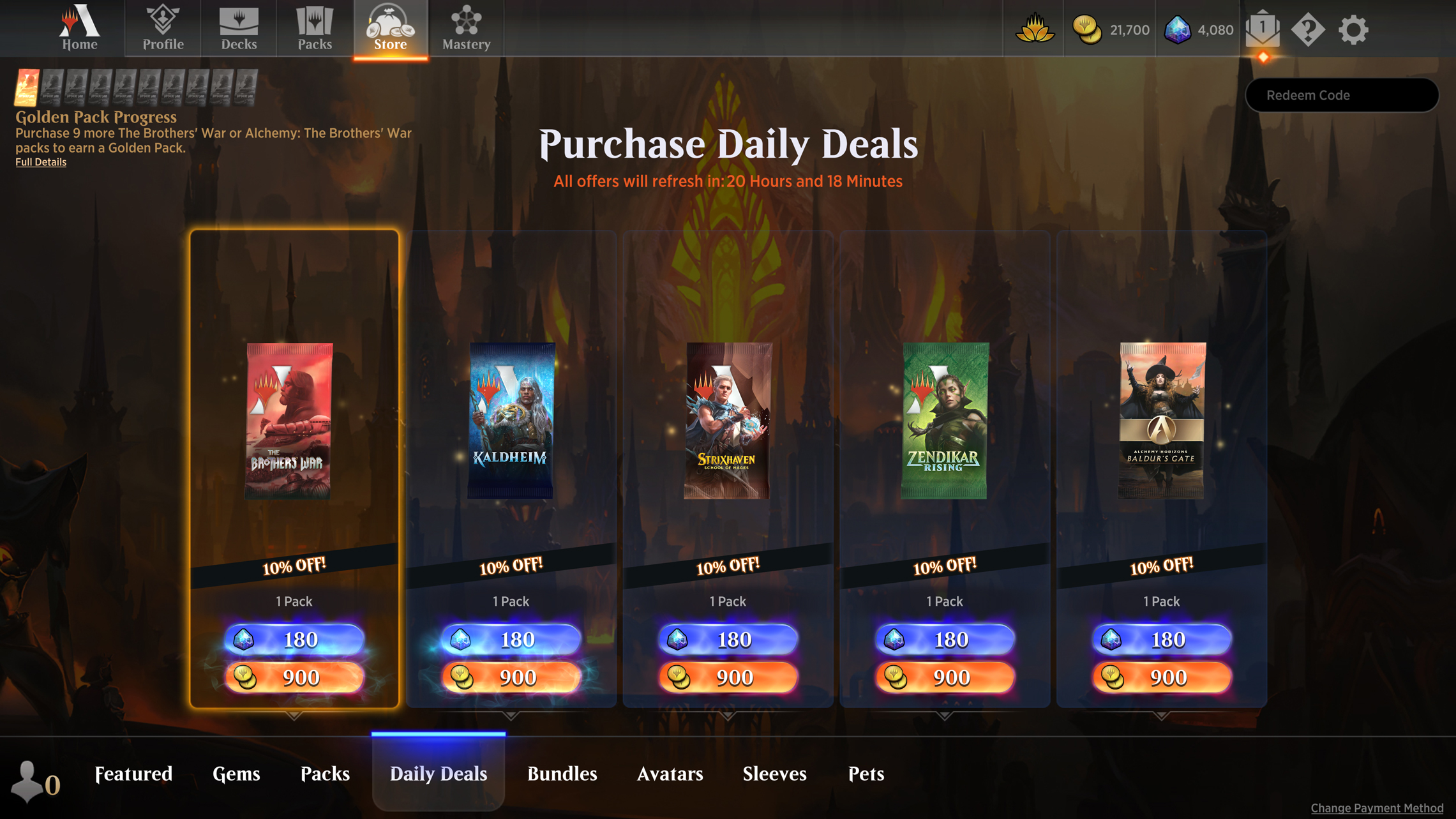 Quick! How much USD is a pack of Kaldheim? It’s 180 gems or 900 gold. This is at trick question. It is impossible to tell because, for a truly accurate answer, I’d need to keep track of how much the gems cost when I bought them. Am I spending gems purchased at the $4.99 price point? Or the $99.99?

This obfuscation and opacity is by design. One way to manage the confusion is via segregating buying and spending activities. I give myself an allowance and buy the scrip today so tomorrow I may let my desires run wild and buy whatever I wish.

The problem, though, is tomorrow might never come and the object of my desires may no longer be available… 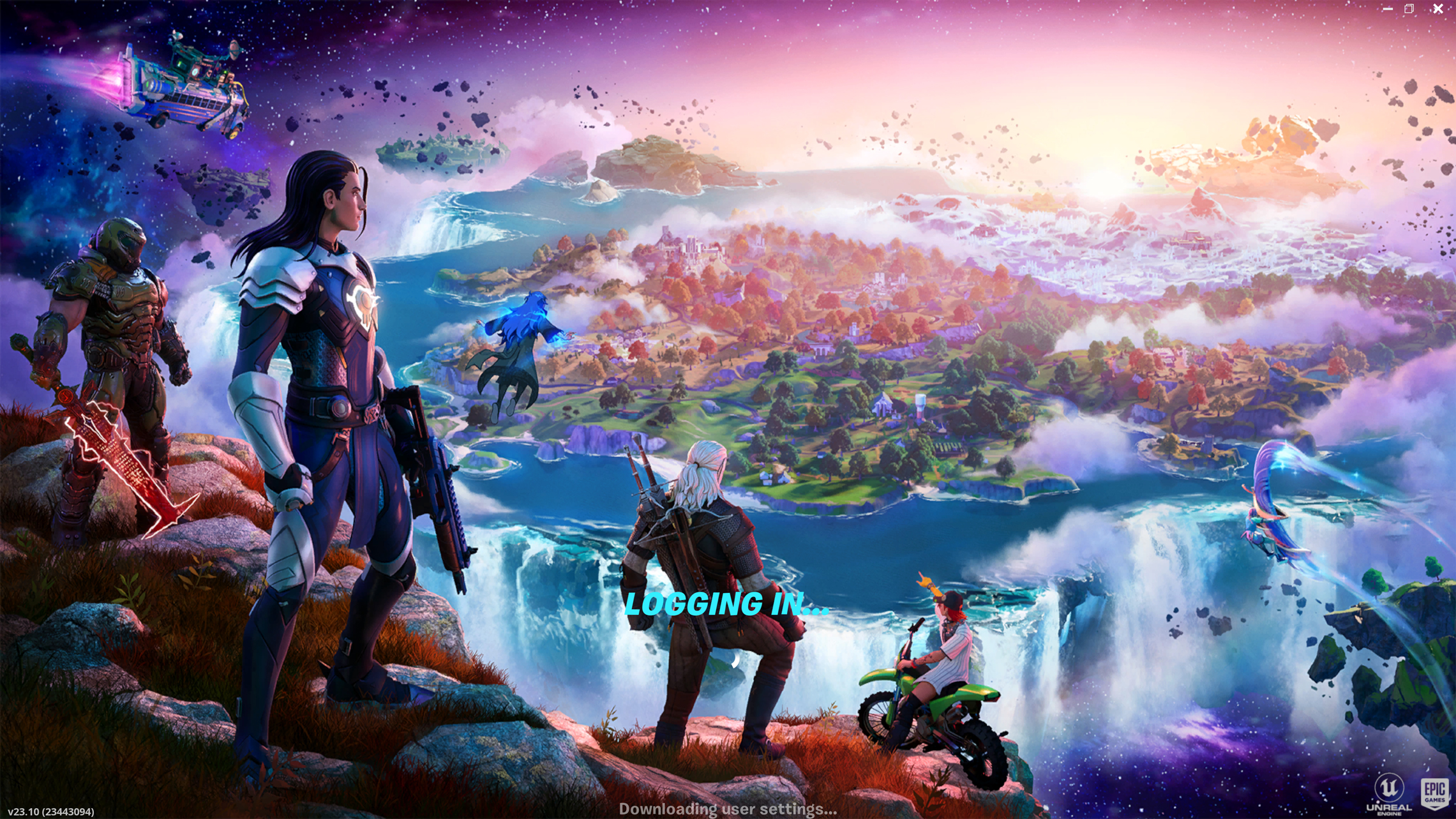 I login to Fortnite (after a brief return to the Epic Games antechamber) and am greeted with time-sensitive offer: Melatcore Mina Pack. 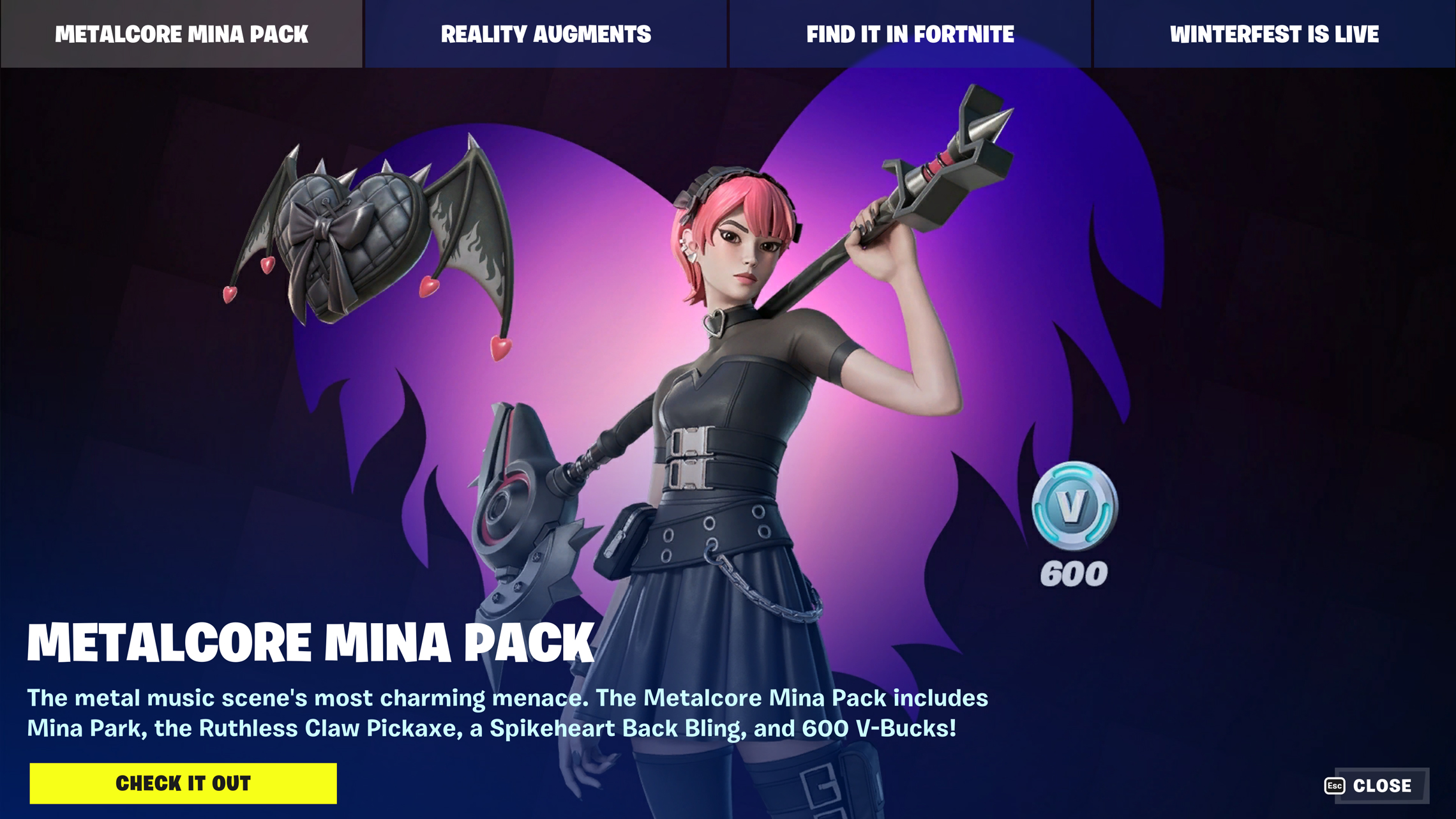 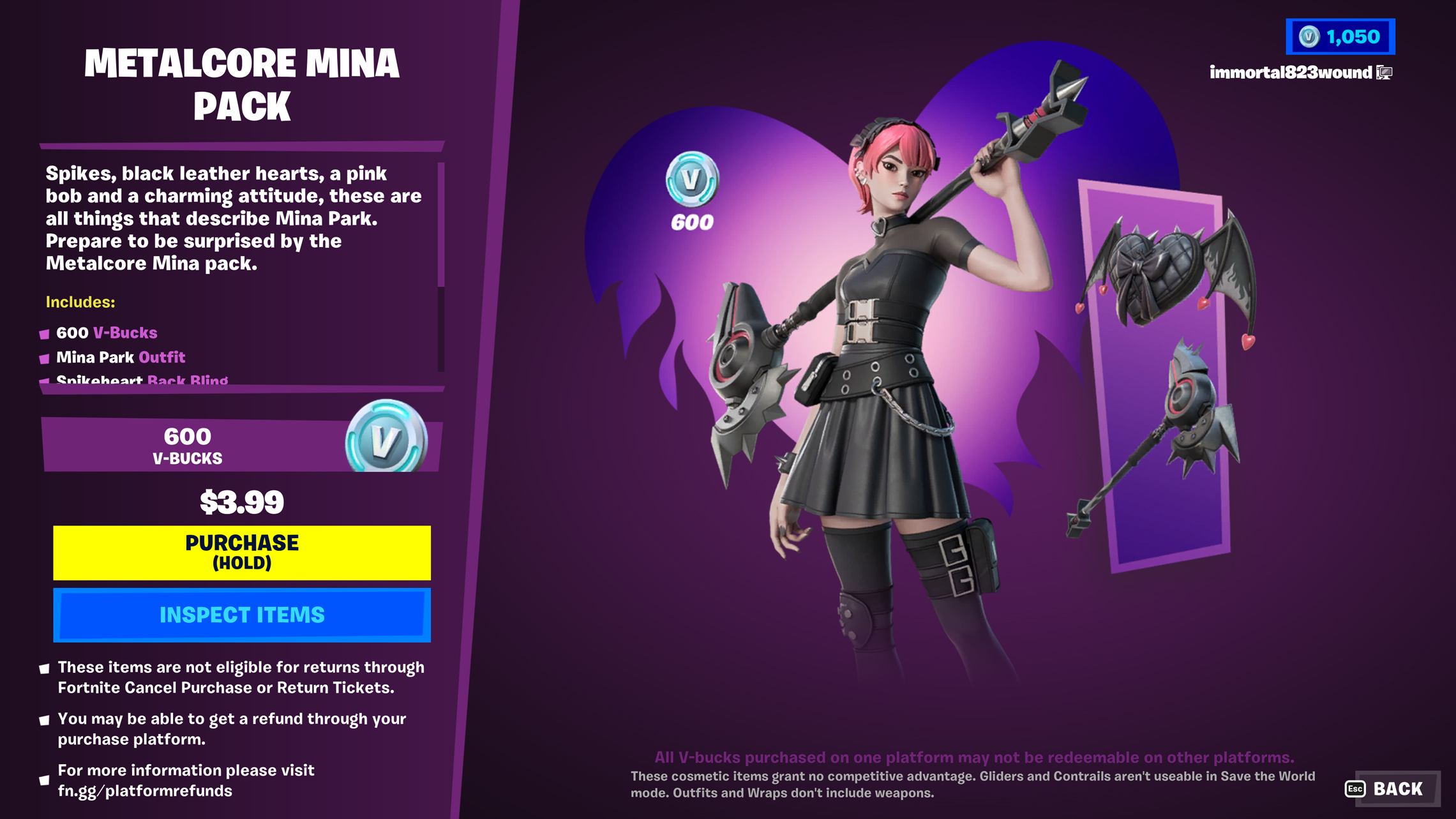 On the detail page, we’re actually given both USD and scrip pricing. Does this have something to do with that $520MM FTC lawsuit?

Epic Games, the creator of Fortnite, agreed to pay about $520 million over allegations that it violated children’s privacy laws and used misleading gaming features that tricked customers into shelling out millions of dollars, the Federal Trade Commission said on Monday. 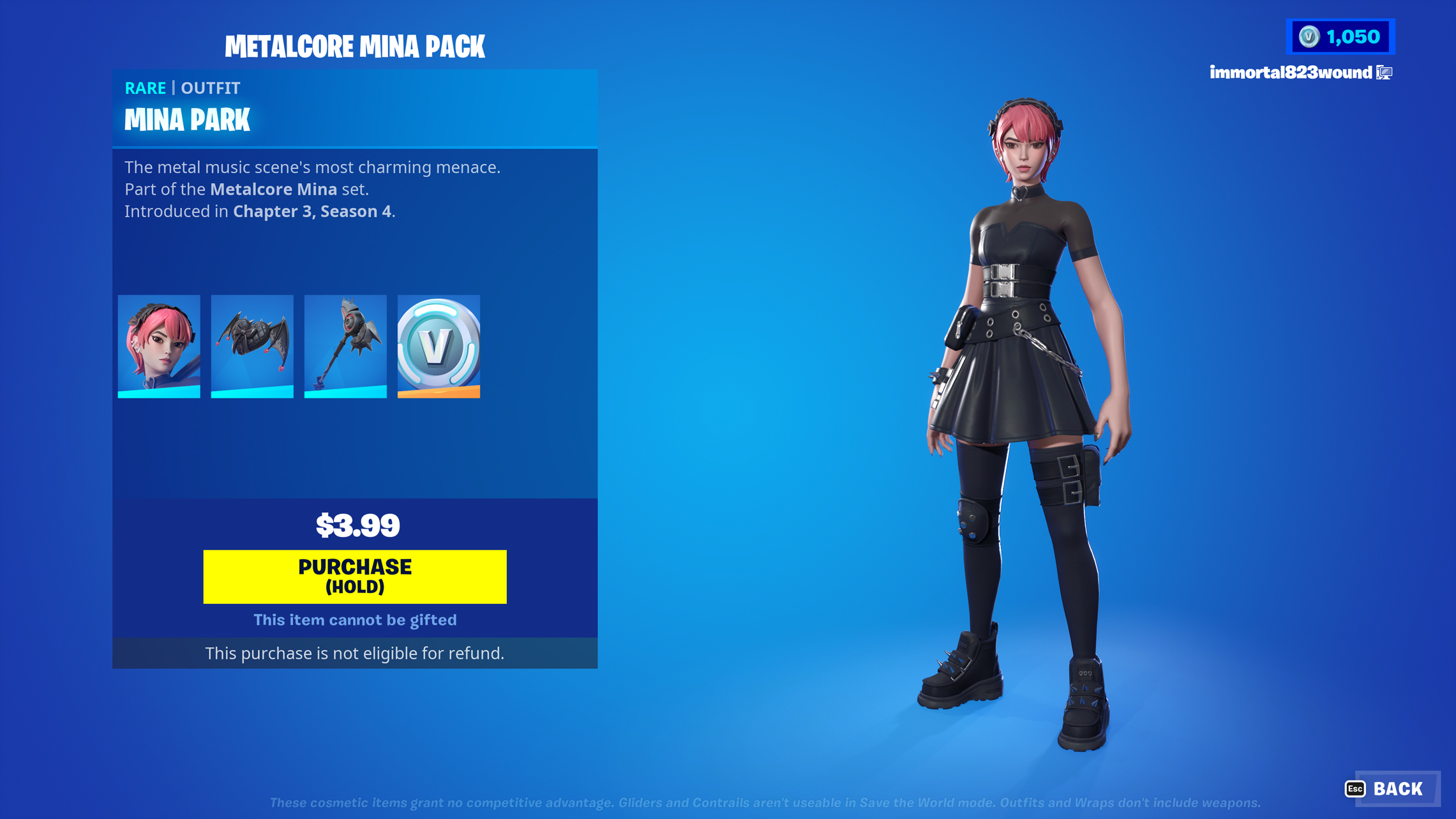 I’m pretty into this character. I get a skin, a glider, a harvesting tool and… V-Bucks? Seems like a great deal! I’m reminded this is not eligible for refund.

Adding V-Bucks to the deal is particularly insidious. Where have I heard this one before…? Ahh, yes. Cash back offers with cars. “Buy this car for $40,000 and get $1,000 in cash back.” On the surface, it is free money that confounds your sense of scale. But in reality, you are mortgaging your future with what is essentially a variable interest payday loan.

I decide to pass on Metalcore Mina. 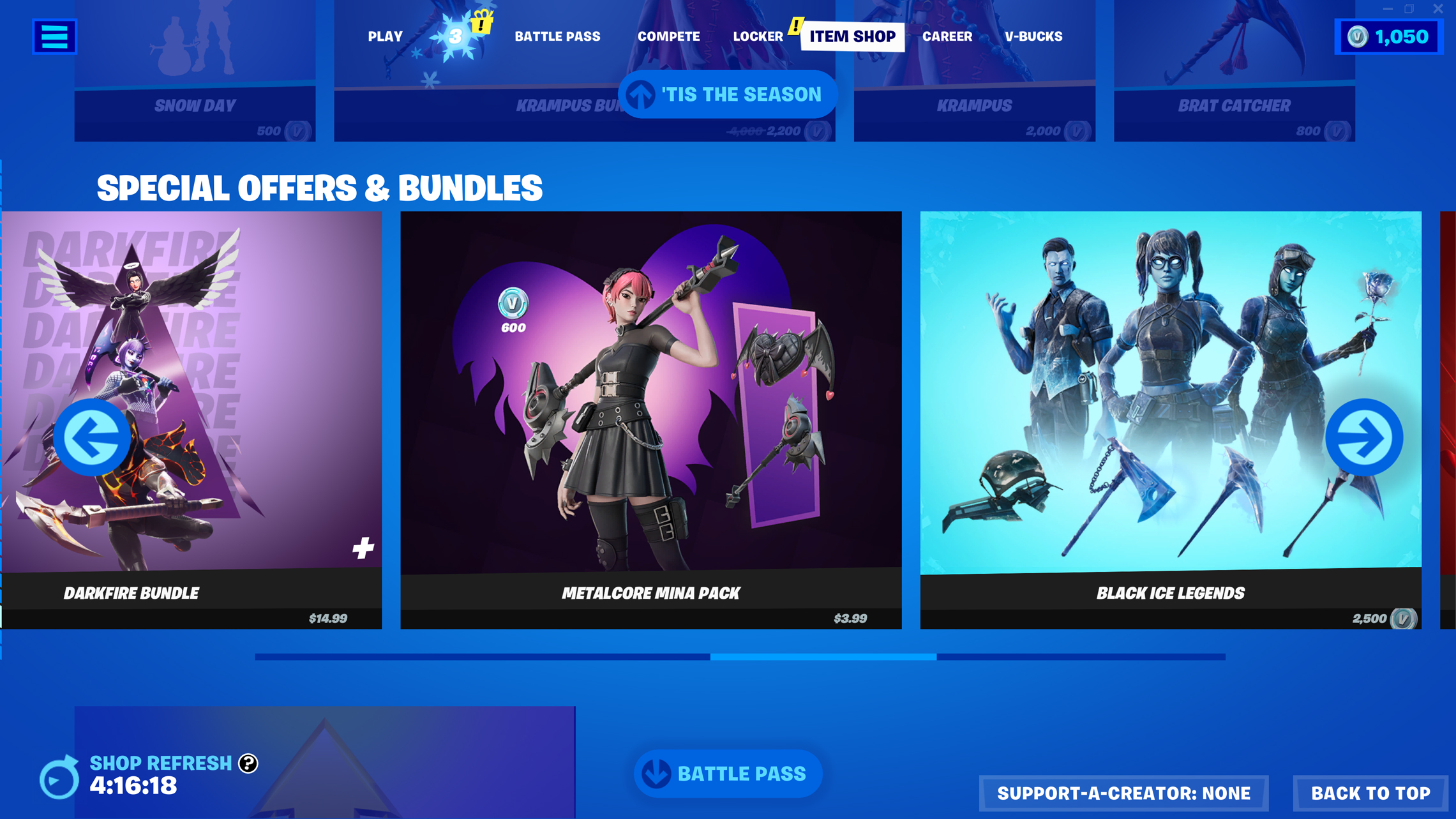 I hit Esc which, according to the lower right corner affordance, is supposed to me BACK. Instead I’m dumped into the middle of the Item Shop. The scroll-up button reminds me 'TIS THE SEASON while the scroll-down button allegedly leads to the BATTLE PASS. 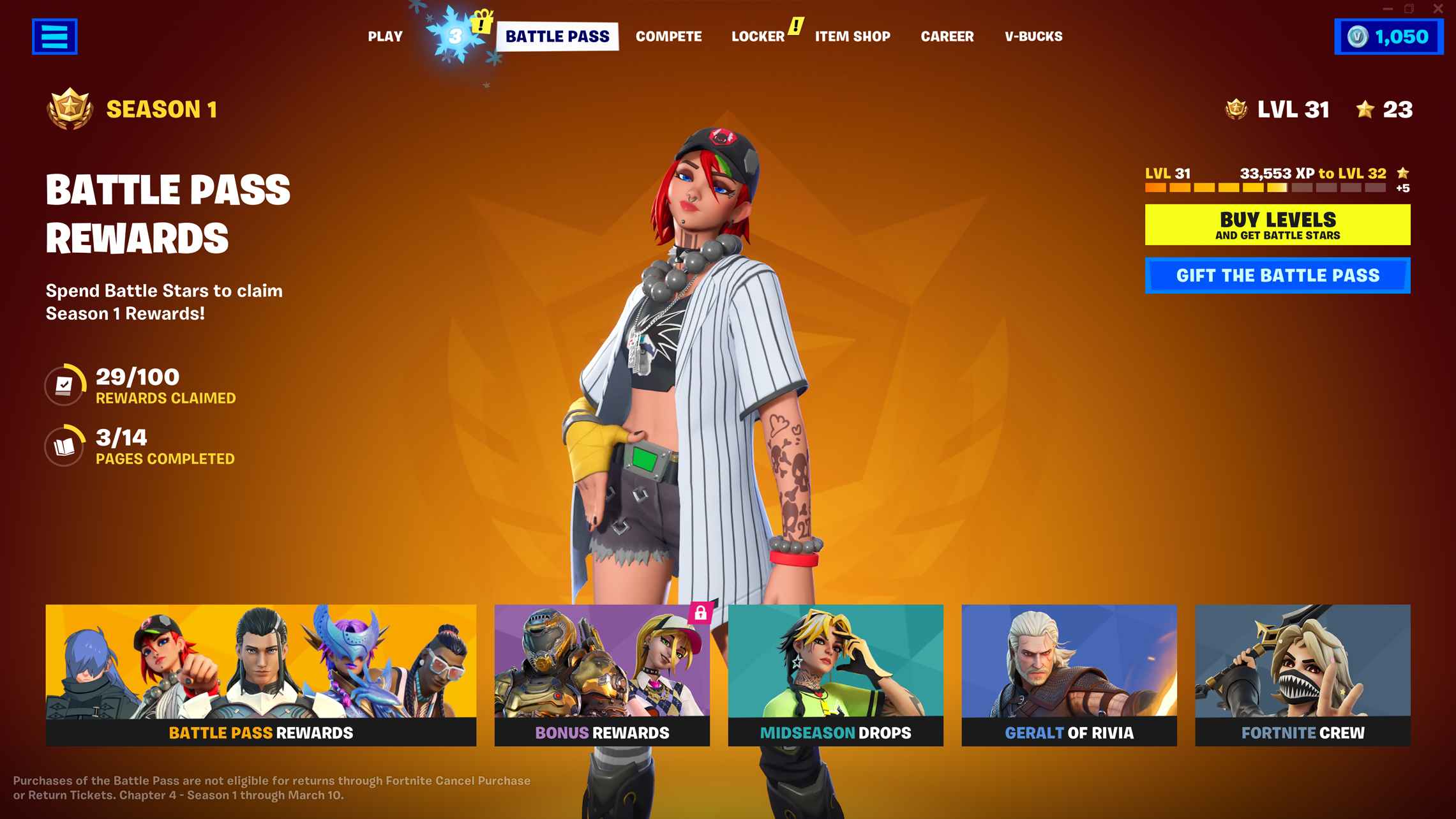 I still get thoroughly overloaded by this screen, even though I’ve seen it a million times. Like the Arena home page, the Fortnite Battle Pass is a menagerie of desires, rewards, levels, challenges, and short shelf lives…

Interestingly, literally everything you can spend money on in Fortnite is cosmetic. It won’t give you an edge mechanically. 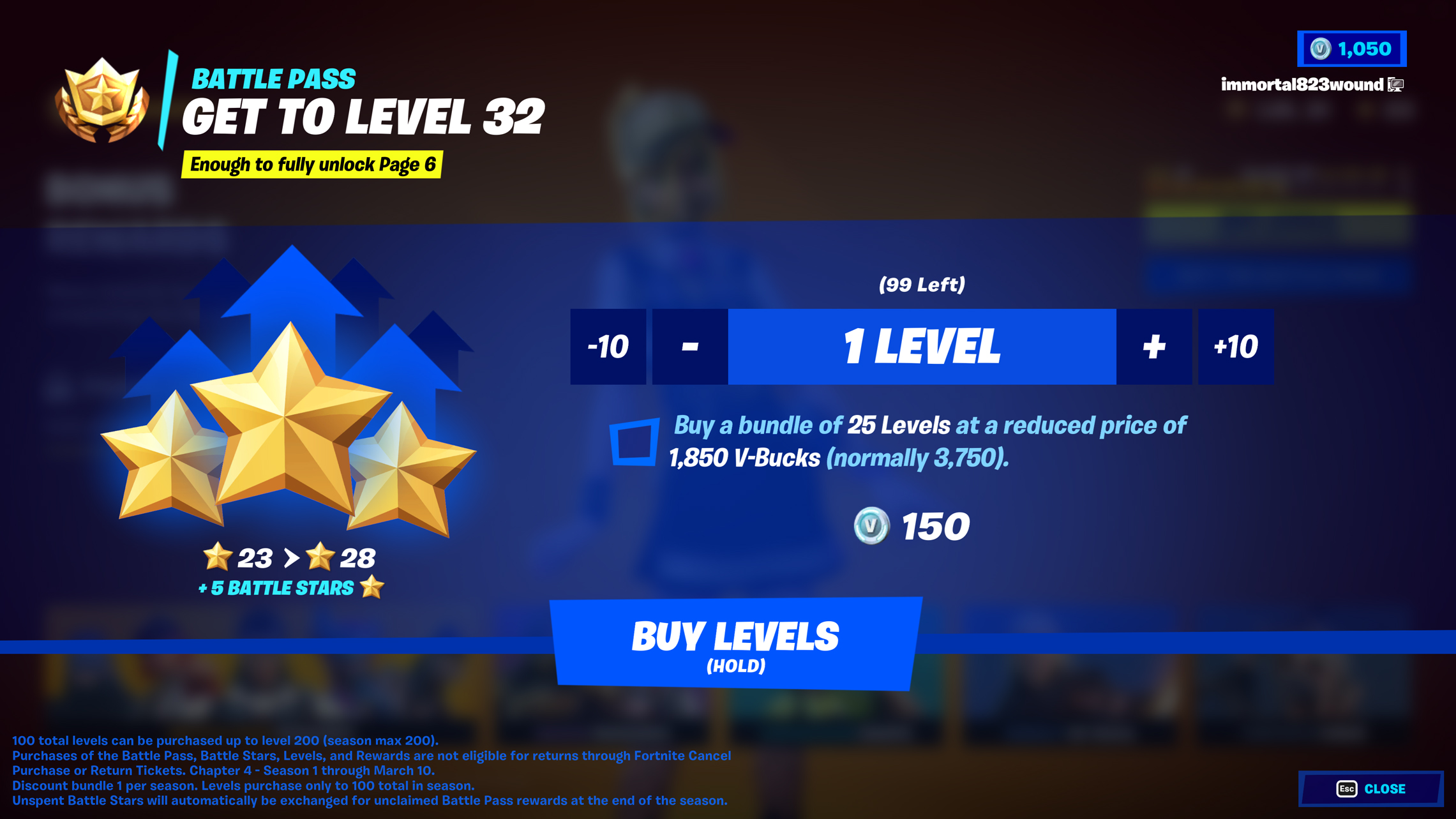 Buying levels is another shell game. It unlocks progression in the Battle Pass - a common F2P/P2W paradigm which functions something like a Netflix or Spotify subscription. Buy it at regular intervals to get more stuff, faster. 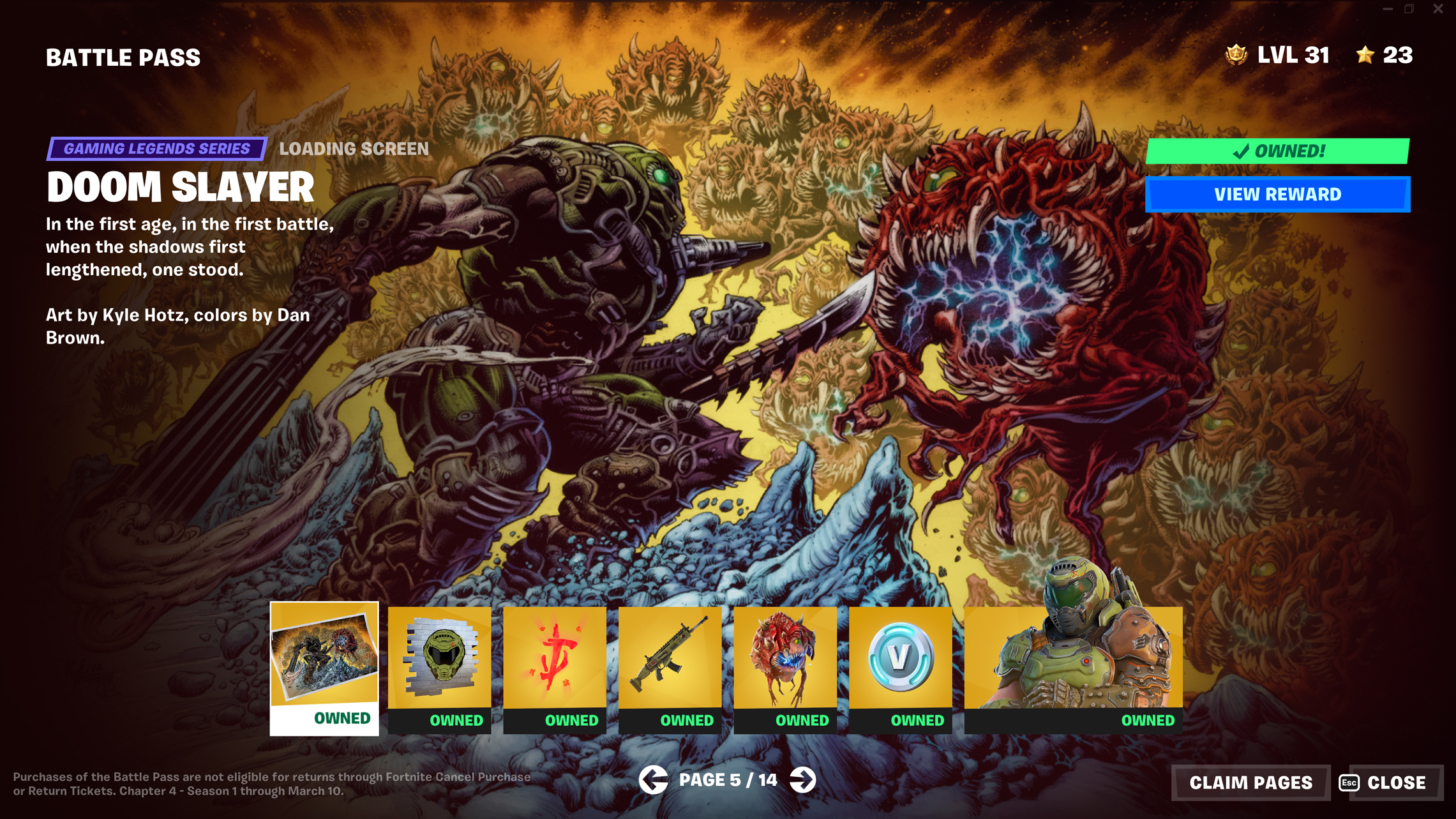 Battle Passes let you spend Battle Stars which can be purchased with V-Bucks. Fortnite Battle Stars are to V-Bucks what Arena gold are to gems: a resource unlocked by simply playing the game. But they can also be purchased… 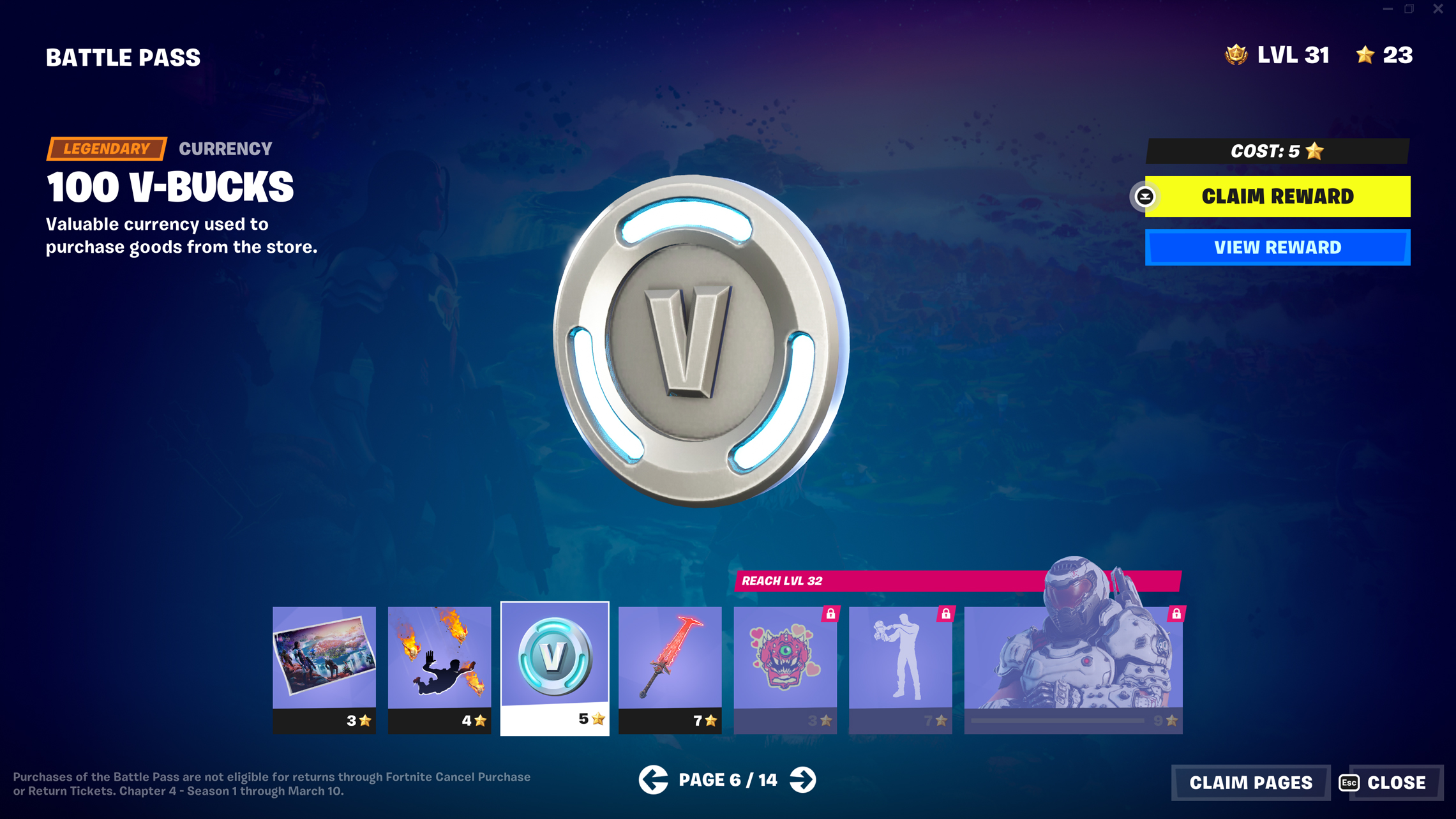 The nauseating logic and scope of this shell game should be starting to come into focus. Razzle-dazzle, shock and awe. 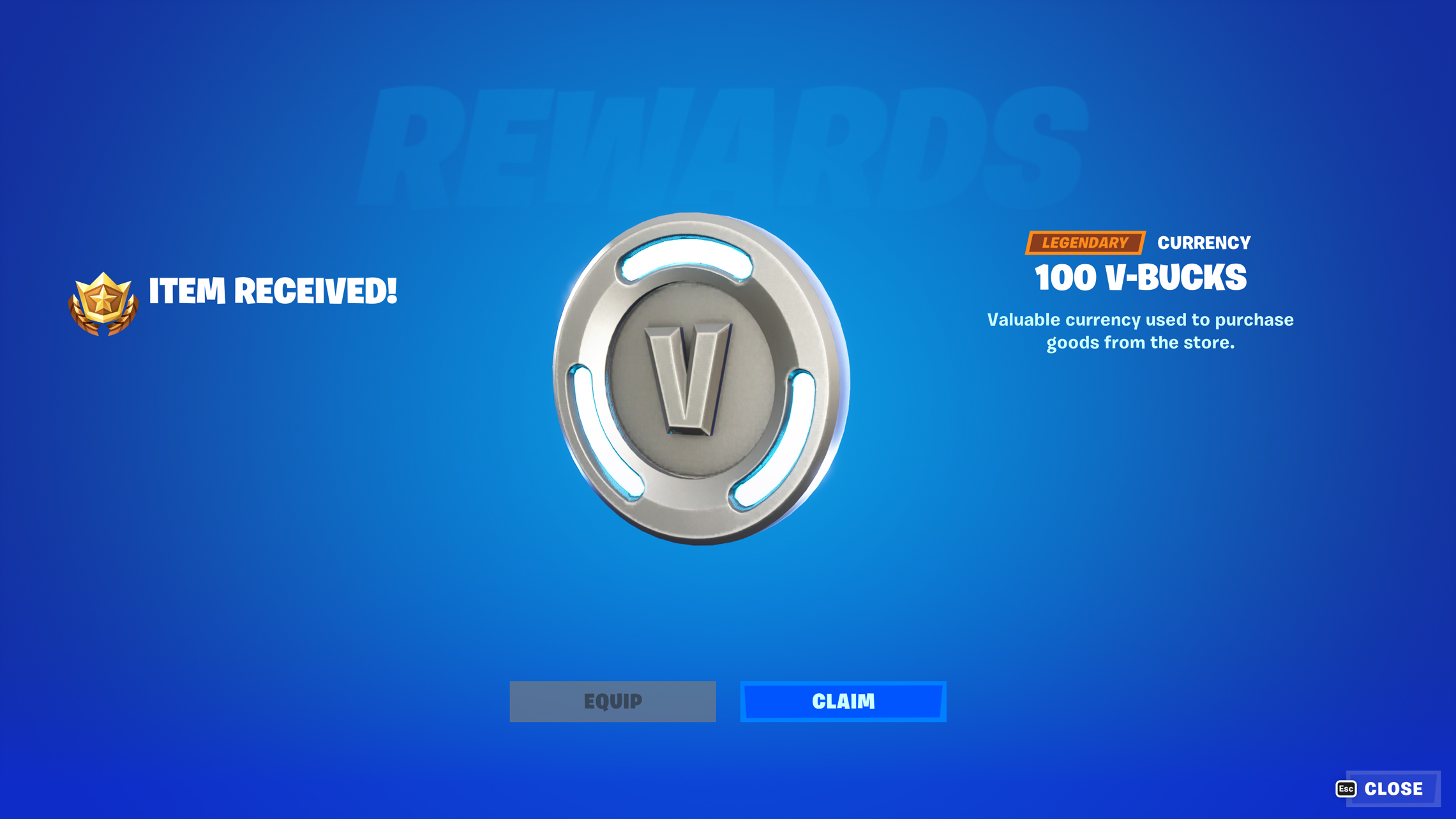 The Battle Pass allows me to purchase 100 V-Bucks for a mere 5 Battle Stars. Those 5 stars probably “cost me” an hour or two of gameplay. 100 V-Bucks are probably worth around $1 USD. 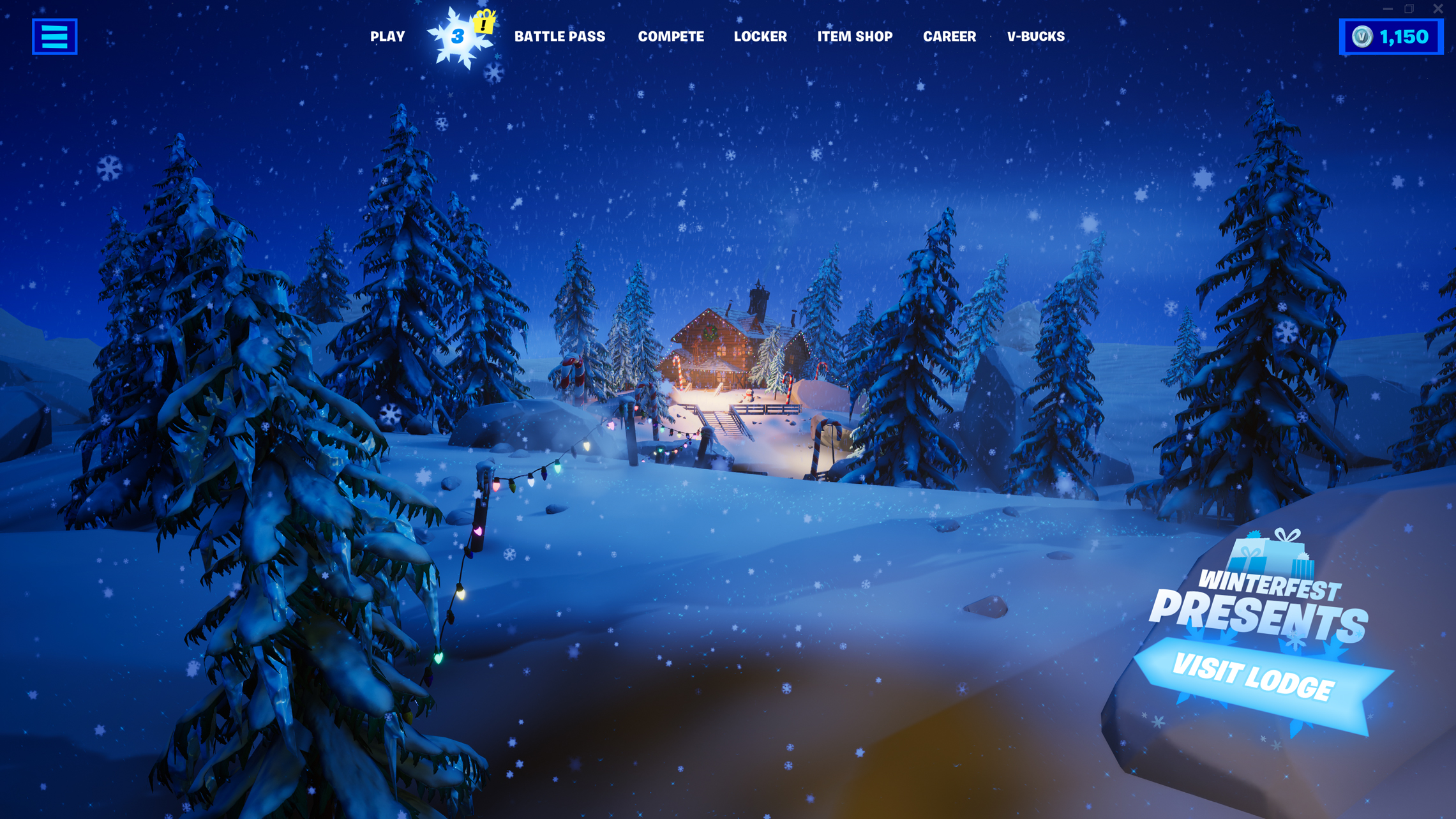 I finally make my way back to the home screen (where I thought the Esc button would take me several screens ago…) and notice there is a special holiday lodge I can visit. 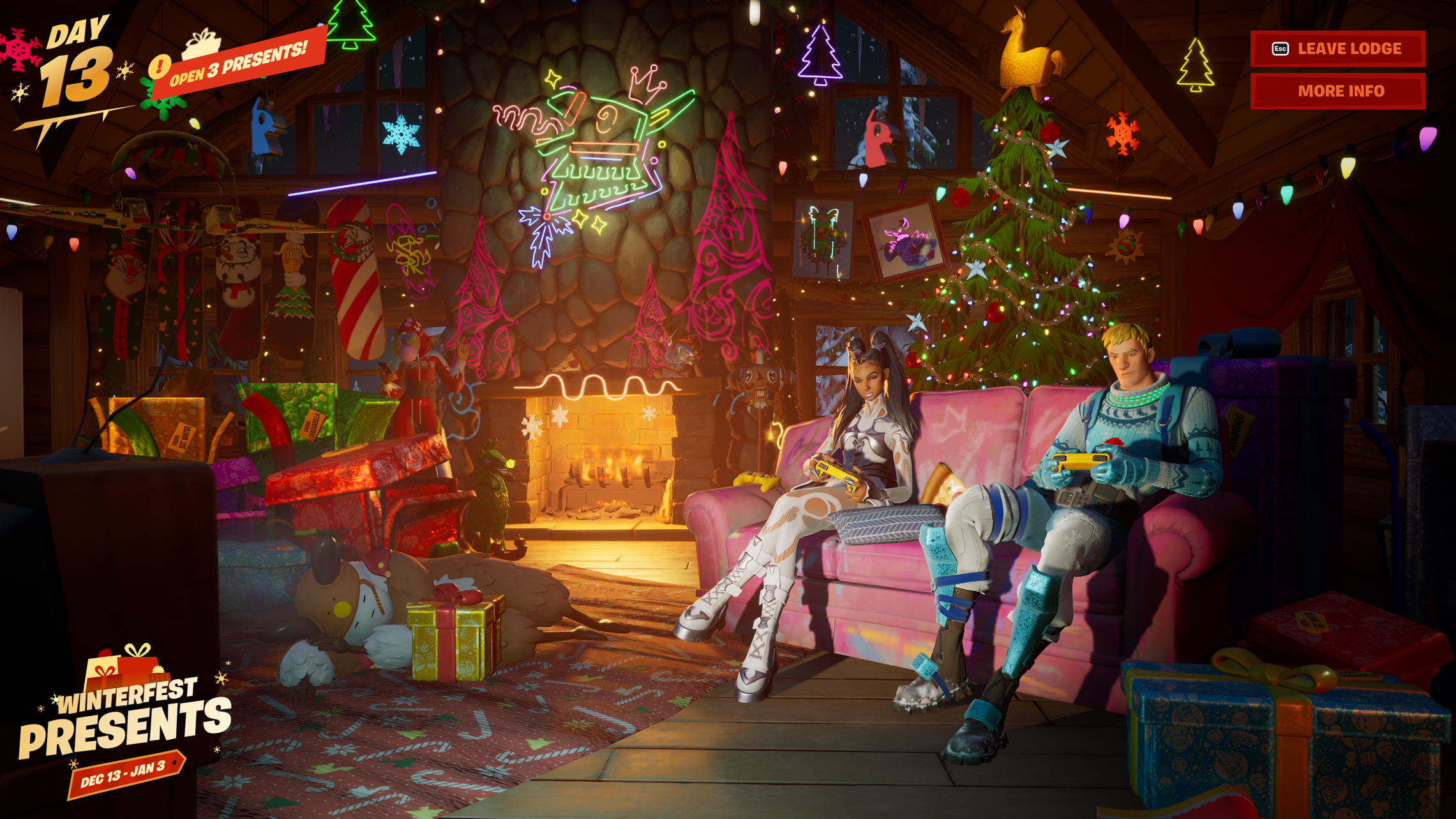 The room is fully of decorations, presents, and characters. 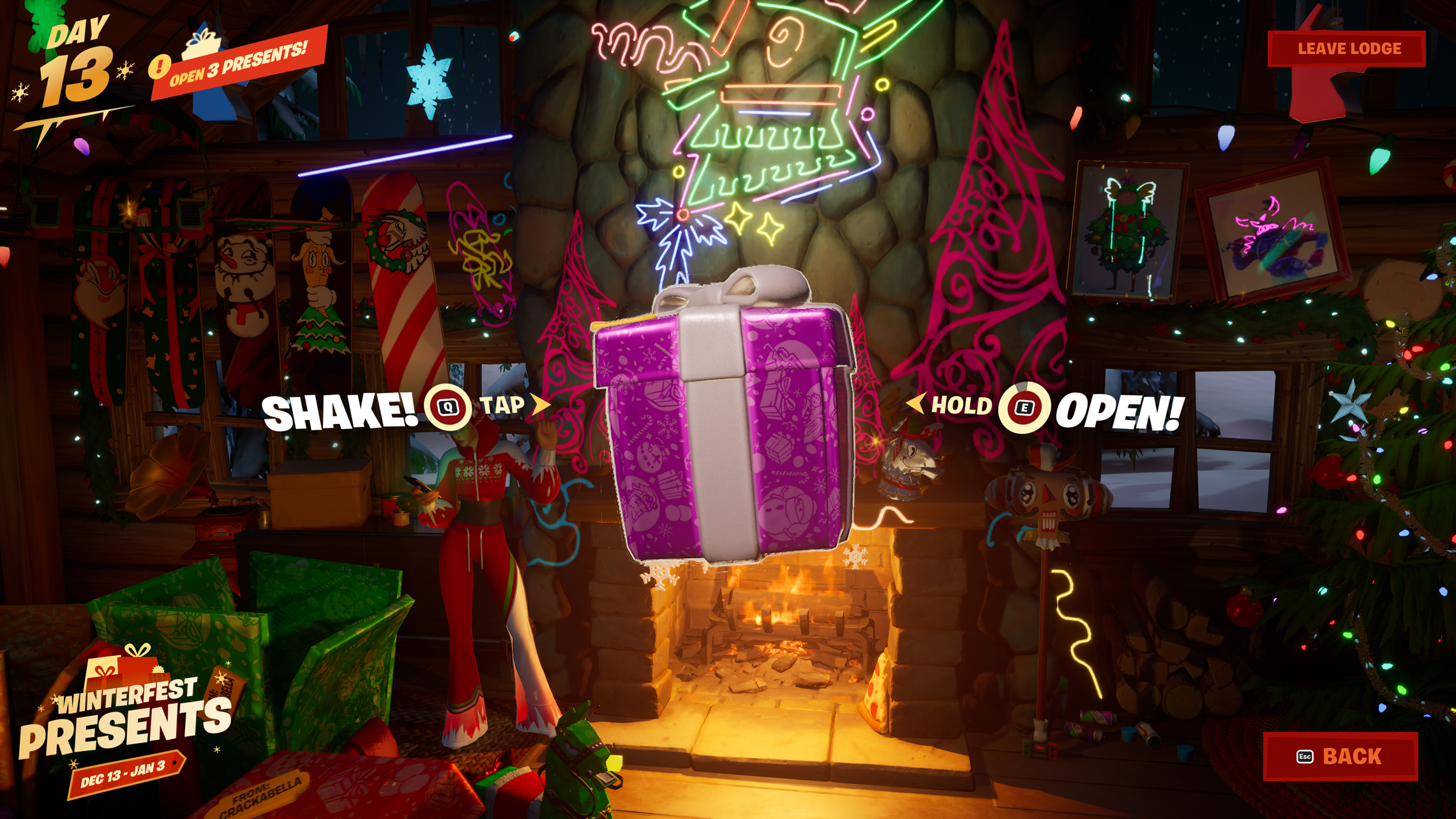 It is a new day, and I have a new present available to open. I press Q to tap the box. It rattles deliciously, ASMR dopamine drive engage. I hold E for 3 seconds and unwrap it. 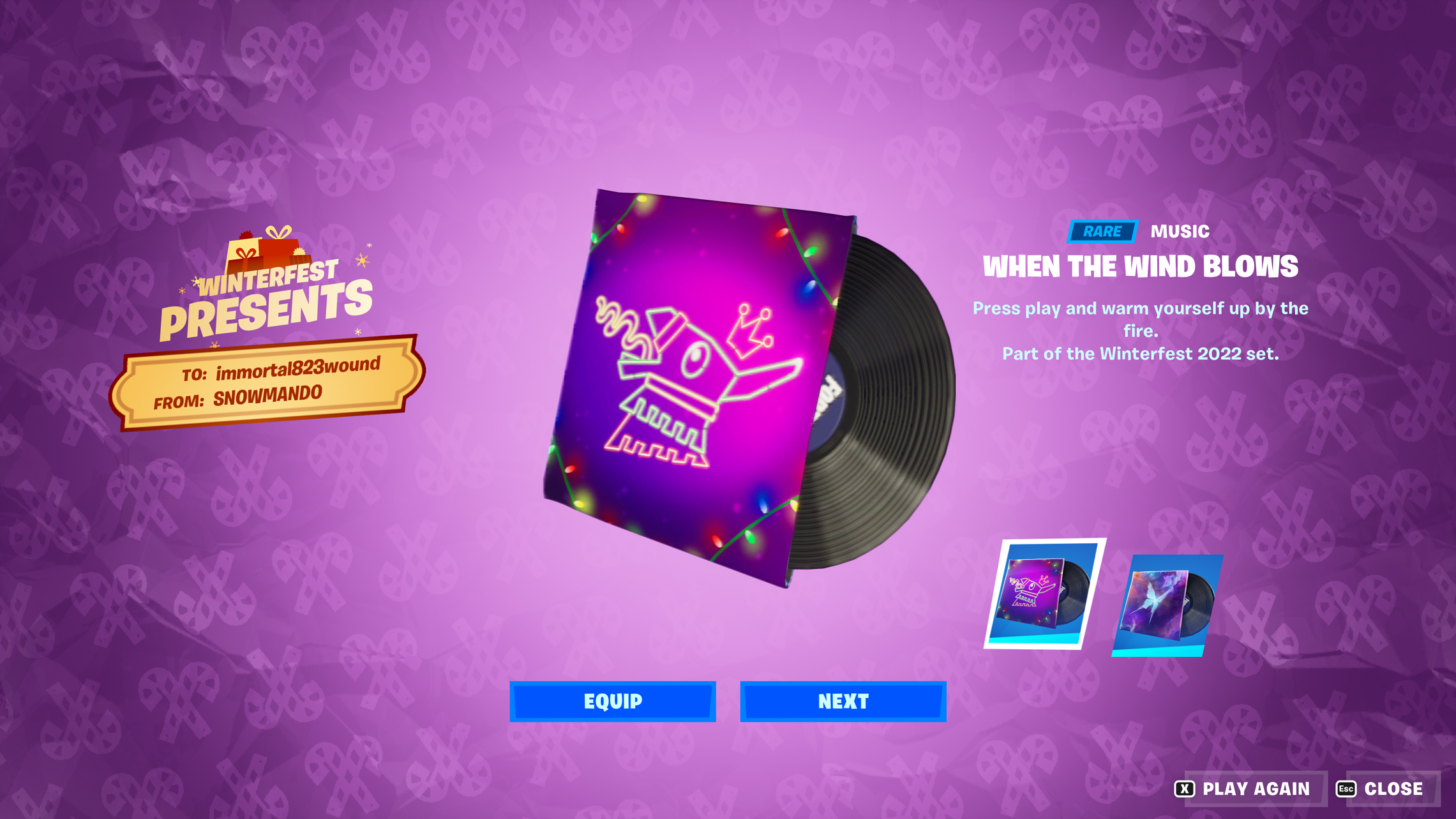 My gift is a “vinyl” record. These items allow me to change the music I hear in the lobby. It is depressingly impersonal - I know this is a canned experience for every player. If everyone gets the same things, are they really gifts? I’m not sure.

I realize opening these presents has resulted in a strange type of brand loyalty. Nauseating self-loathing. I’ve opened more presents from Epic Games than I have from any of my family or loved ones. And Epic has gifted me more presents than I’ve given…

Well, on that note… I’m almost done with my jolly journey of a blog post. Time for Call of Duty. 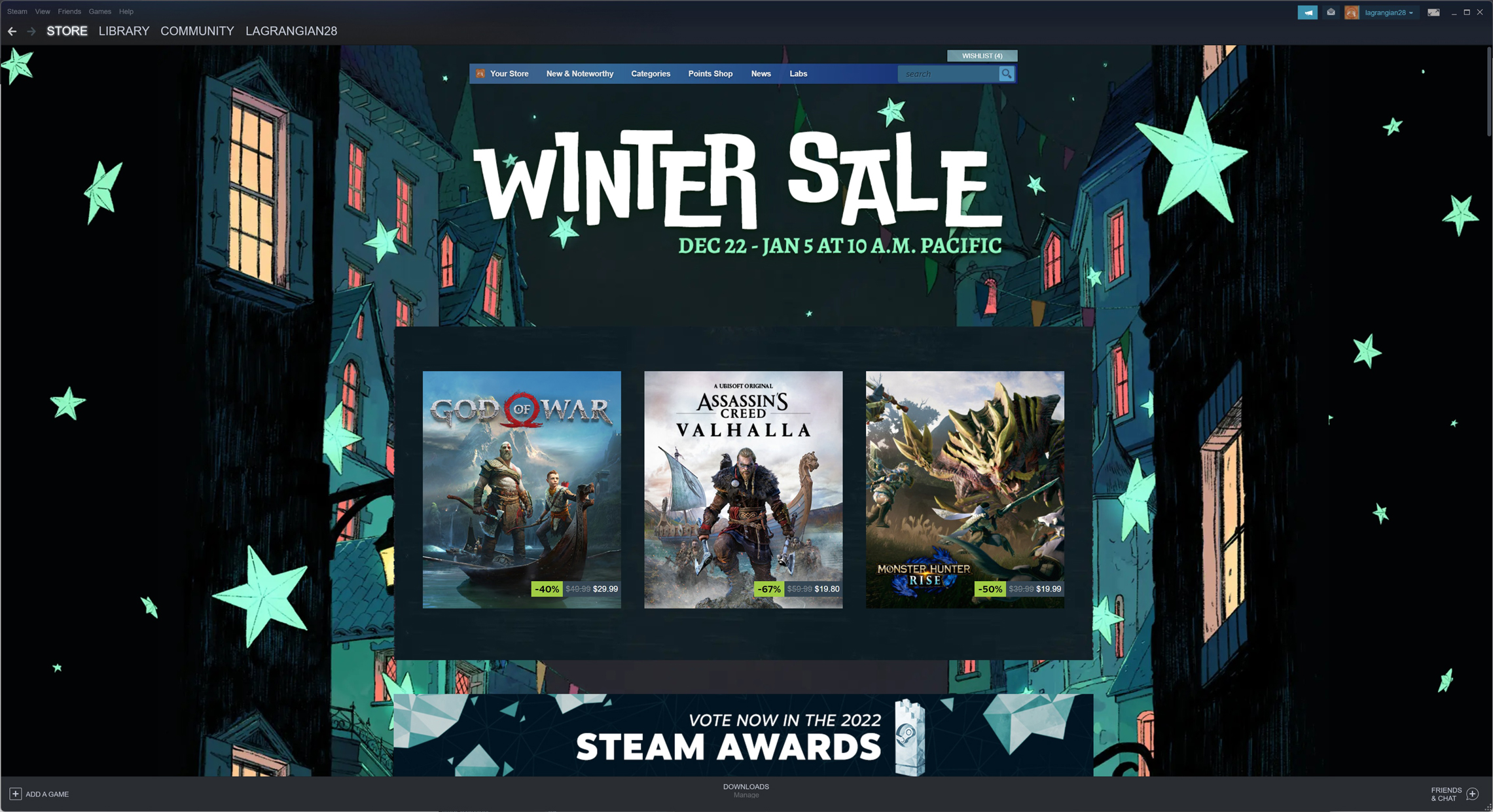 Like the Epic Games launcher, before I can even start CoD, I must launch Steam. A 70s kitsch headline welcomes me. This is a limited time sale. Gosh 40%, 67%, 50% off… 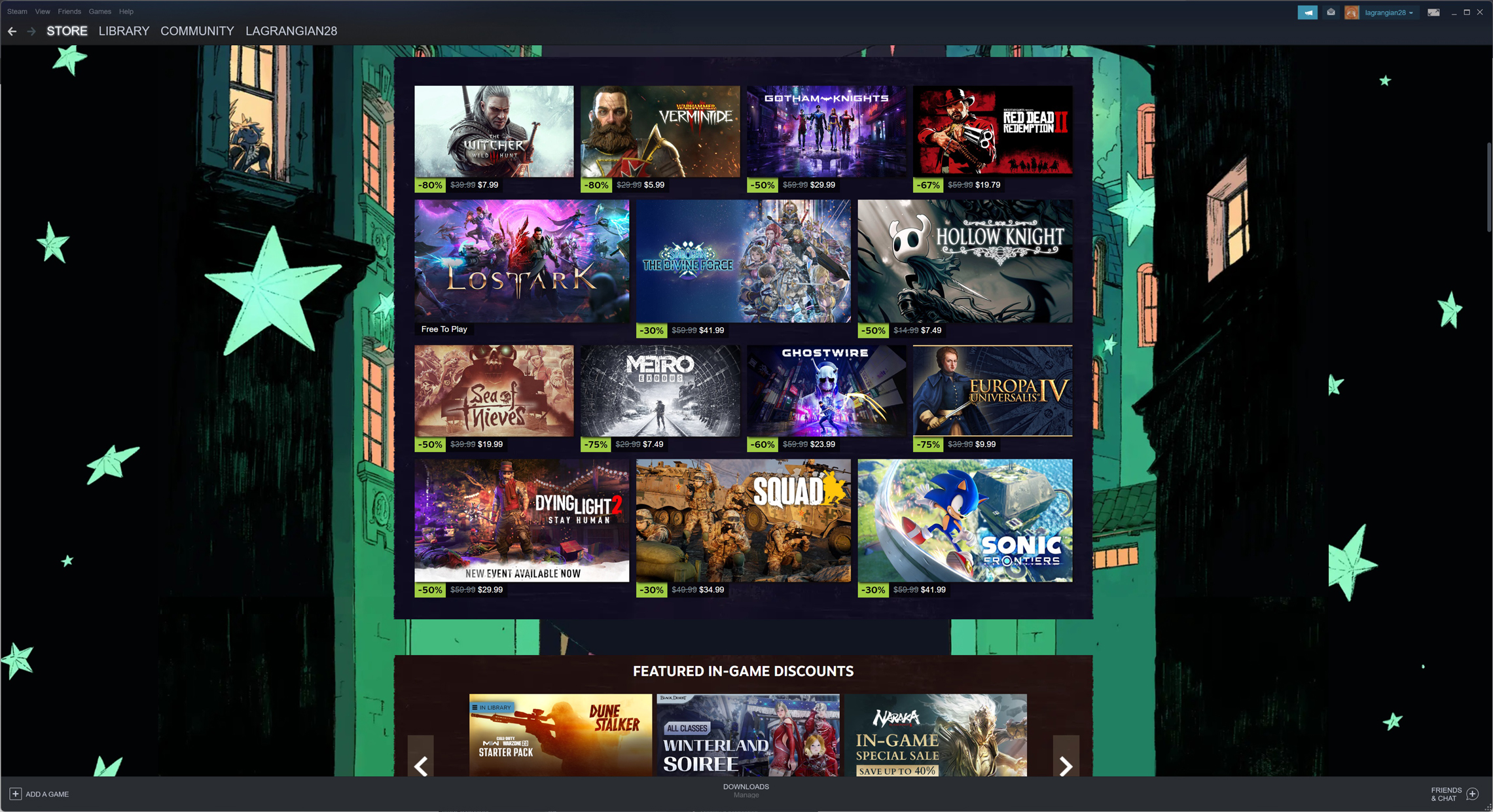 I scroll down and see even more titles, some of which I own already, a “tell” that this is a universal ad and not targeted. My id does not stir, and I manage to launch CoD without spending anything.

The game is literally called Call of Duty® Modern Warfare® II Warzone™ 2.0. It is Season 1. This incarnation has just launched two months ago.

The CoD franchise is such a large cultural phenomenon, it is practically invisible. A hyperobject spanning countries, generations, and languages, CoD has been extracting capital since 2003. As of writing, there are 10838 CoD Guinness World Records including “Best Franchise.” 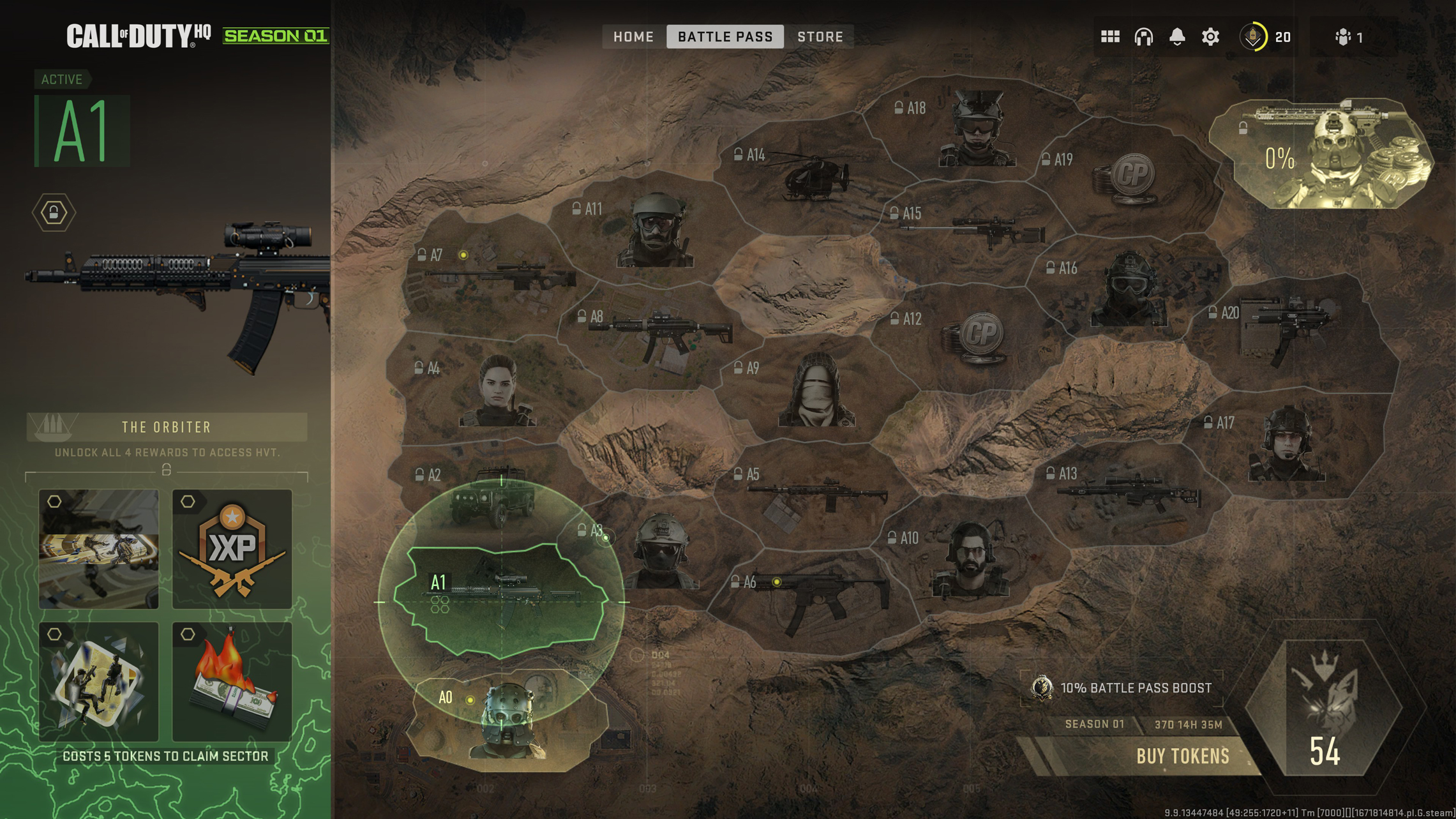 Like Fortnite, CoD has a Battle Pass. It also has scrip. There is an item represented by an icon of burning money. I wonder what that might symbolize? The layout and design of these pages are actually quite rational when compared to Arena and Fortnite. Perhaps a necessity given the target demographics and subject matter of the game? 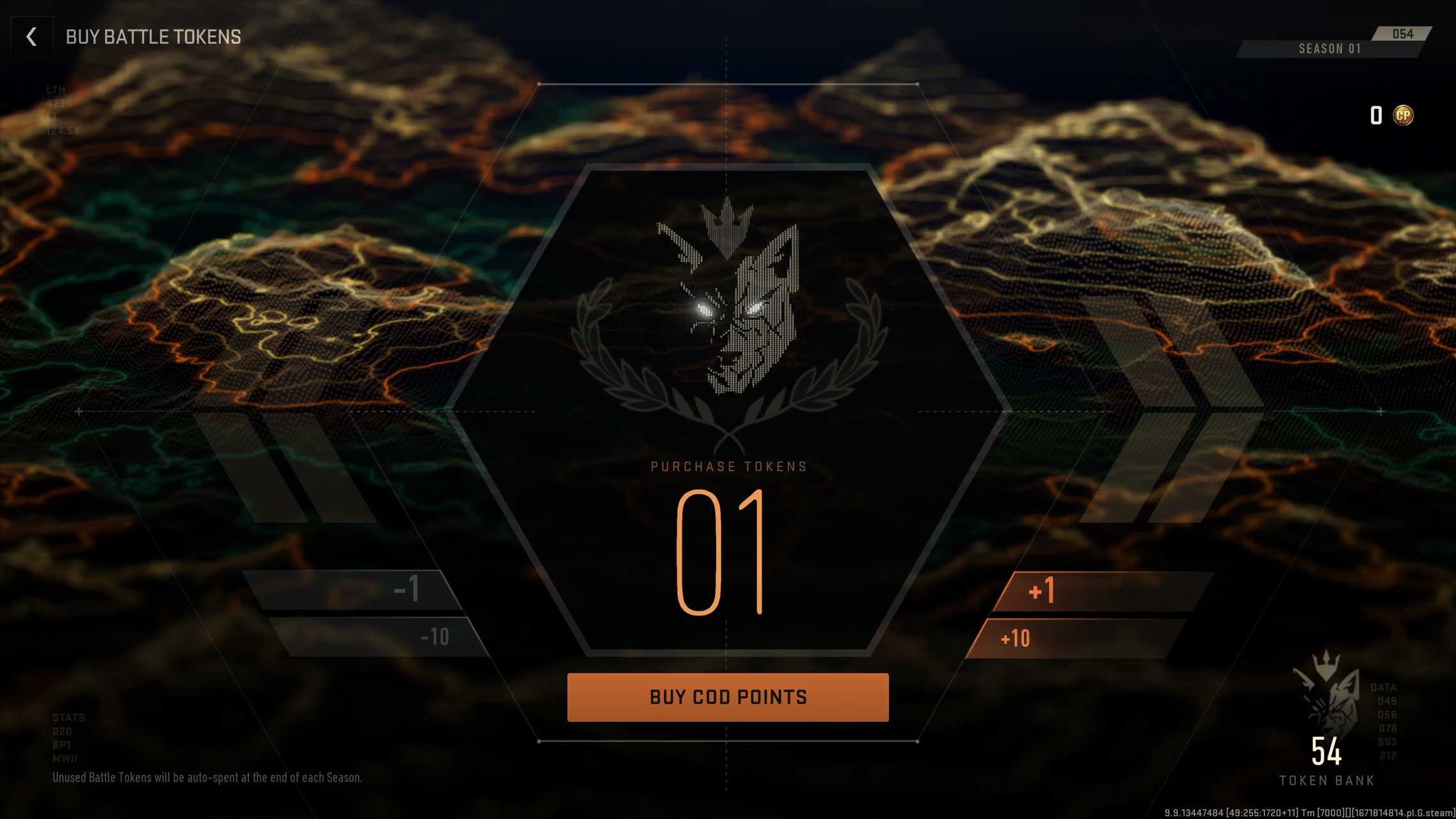 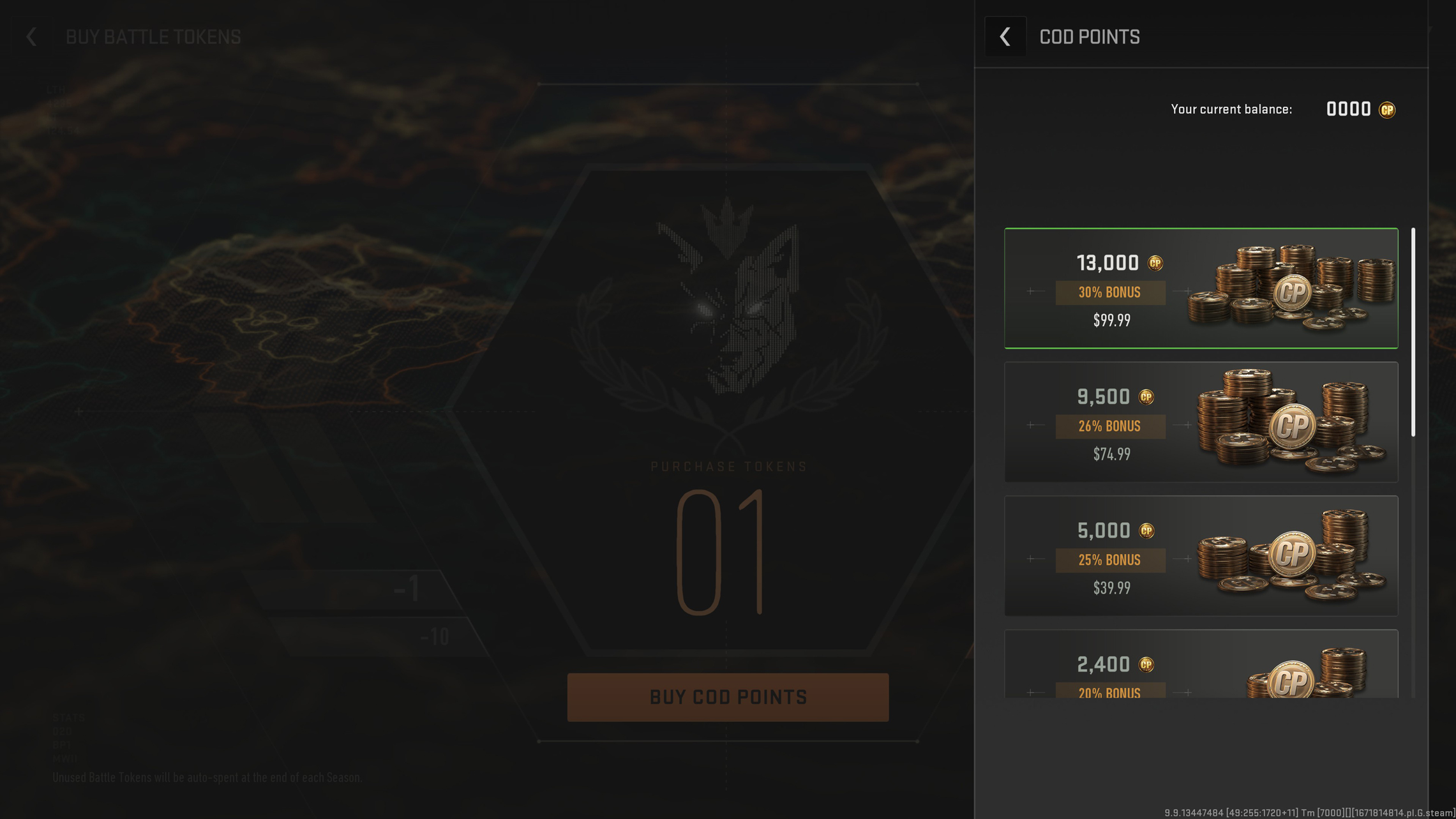 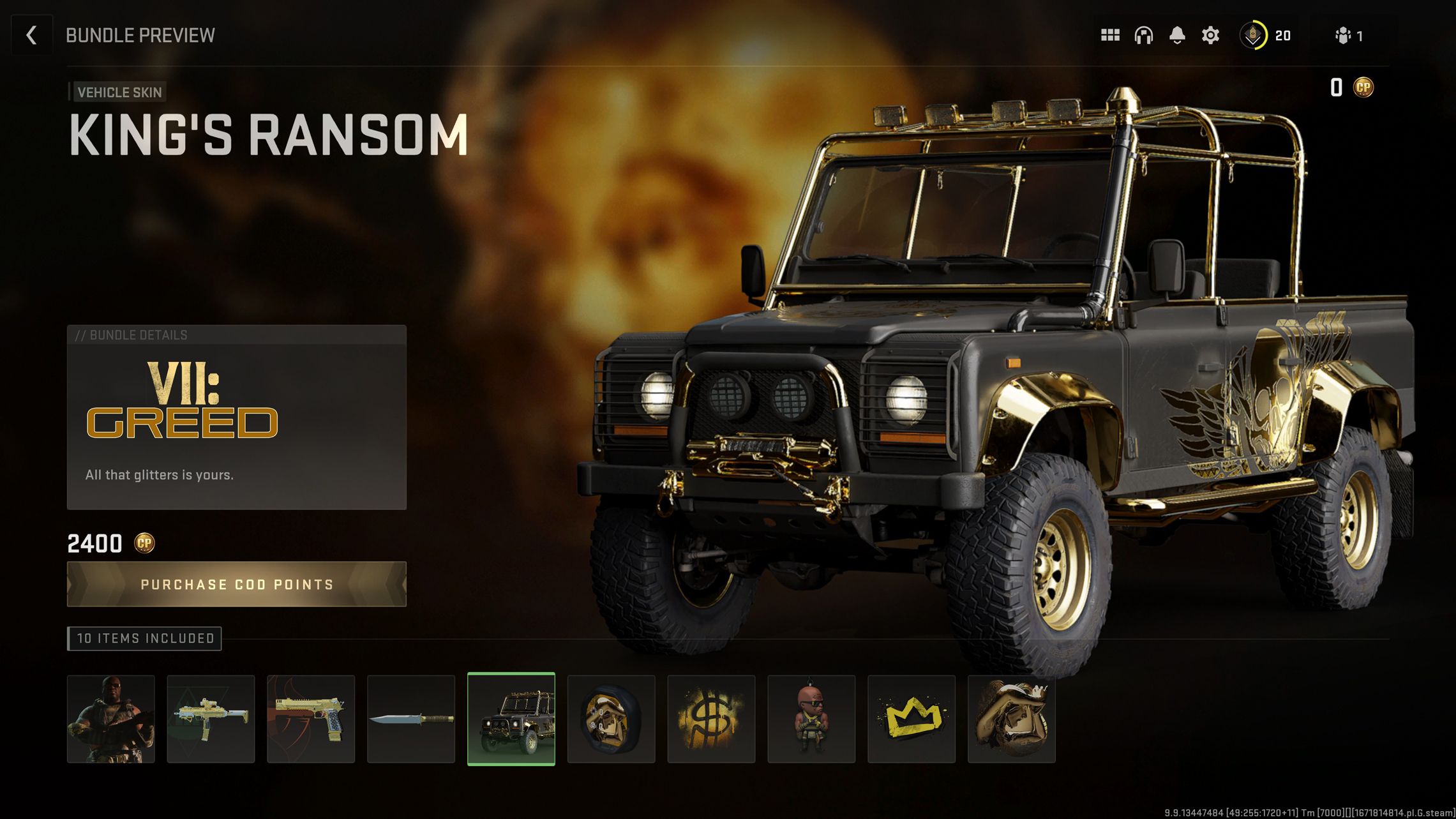 CoD isn’t quite as P2W as Arena, but it is certainly a factor. Guns can be upgraded, offering quicker reload times or more stopping power. I have questions around the precise numbers.

How much of an edge do they really confer?

A headshot is a headshot right?

I used to go to the mall to hang out with friends. Wandering from Hot Topic to Gamestop to the foodcourt. It was fun. Get out there. Be seen. Spend some money. Eat a Sbarro.

With the collapse of IRL shopping and migration to virtual worlds in our plagued times, online stores in games represent a new kind of commons. I’ve come to appreciate the garish designs and ugly products. I get to play “escape the antechamber” mini-games before each round. Cosmetic items confer social clout: my friends know - as well as one can - how much I spent on my T2 Sarah Connor skin.

Now if you’ll excuse me, I have some shopping to do, and I don’t want to miss any holiday deals.